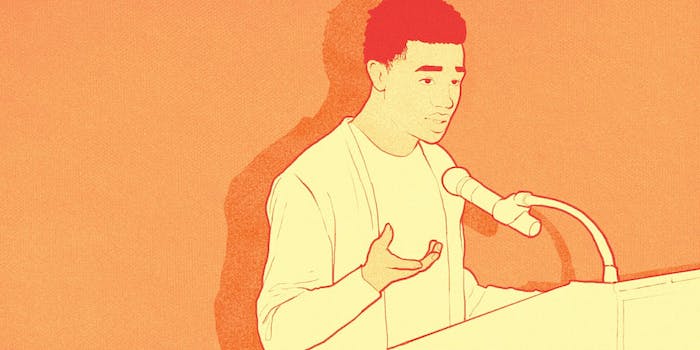 The young Ferguson protester just wants freedom for his people.

What has happened to America in the year since Ferguson?

Reggie Yates, a British radio and TV presenter, wanted to find out. To do so, he visited Ferguson, Missouri, a year after white police officer Darren Wilson fatally shot unarmed black teenager Michael Brown for the filming of Reggie Yates: Race Riots USA, which aired Tuesday night on BBC Three in U.K.

In the film, Clifton Kinnie founder of student-activist collective Our Destiny STL guided Yates through Ferguson and showed him what’s now known as Ground Zero.

The 18-year-old prominent local protester helped young people in the St. Louis area get involved with the movement during the time of the uprising, when he was just 17. He launched a network of student organizers, focusing on community outreach, leadership, organizing demonstrations and protests, youth voter registration and mentorship.

I hope the doc. serves as a reminder to young people that they can stand up and fight back, regardless. Fight for what you believe in.

Kinnie spoke with the Daily Dot about his involvement in Race Riots USA, why people need to see the documentary, and the impact the Ferguson uprising had on the U.S.

What inspired you to become an activist in Ferguson?

Clifton Kinnie: During those early days of protest, I stood side-by-side by several other high school students. I couldn’t believe something like that could happen… in America. I really couldn’t believe kids could’ve lost their lives out there, you know?

What inspired you to be part of Race Riots: USA?

Just the real fact black people aren’t allowed to tell our stories. Long before Twitter, people would tell our stories, and it’ll have parts of our pain and the truths. Our stories’ pain, trauma, joy, and the struggle in this movement are important—so that other generations can continue to work to get free.

How has Ferguson changed in the past year?

Several of our political leaders, like Senator Elizabeth Warren and Senator Bernie Sanders, they’re explicitly talking about police violence and mass incarceration, and explicitly saying this is the new civil-rights movement and many of the young leaders—like myself—are leading this, and we’re actually changing lives, and we’re saving lives.

You showed Reggie Yates around Ground Zero, correct? Explain what Ground Zero is to people who might not know.

What are some of the things you talked about with Reggie Yates surrounding the events of Aug. 9, 2014, and the aftermath?

It was traumatizing. It was a time in which it truly radicalized me in a way in which I wanted to seek full liberation for my people, not just any partial liberation promised to us in the past. Just liberation; we just want to be free. And that’s what the Ferguson uprising did for me. It radicalized me and so many others.

I hope that people can learn about stories, learn about our truths. I hope they take what they learned from the documentary and they run with it, and they do something about ending police violence and state-sanctioned violence [against] other oppressed people across the country and across this world.

Will people be able to see the documentary here in America?

But currently, it only aired on BBC Three, is that correct?

How do you see racial issues factoring into the 2016 elections?

The issue of racial violence and police violence is a big part of many of the Democratic presidential candidates platforms. I’m really looking for more than rhetoric. I’m looking for more physical policy… like put some legislation forth. Let’s do something about ending this. Let’s get really serious about ending police violence that just oppresses people—especially black and brown, young, men and women.