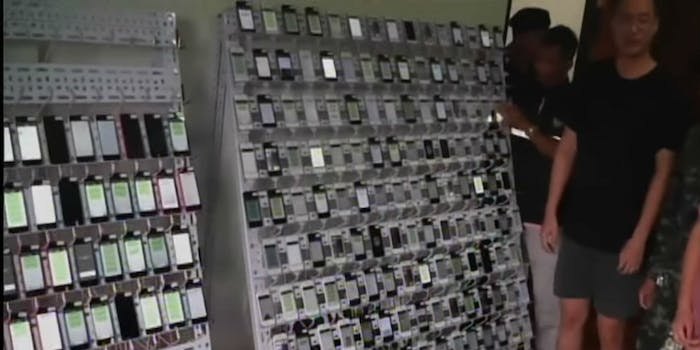 Three Chinese men were arrested in Thailand Tuesday after it was discovered they were working in the country on a tourist visa. But it’s what they were doing that makes their apprehension notable. The trio were operating a massive click farm made of 474 iPhones to spam WeChat, a Chinese social media platform with more than 900 million monthly active users.

A click farm is a group of low-paid workers using prohibited methods to increase a website or user’s value by inflating pageviews and online engagement.

Police found just under 350,000 SIM cards and 474 iPhone 5S, 5C, and 4S models in a house near Cambodia. The three men running the operation told local officers they were hired by Chinese companies to increase “likes” for several products including herbal medicines, candy, and a tour company, according to Filipino news outlet ABC-CBN.

Wang Dong, Niu Bang, and Ni Wenjin told authorities a company in China supplied the phones and paid them about $4,400 a month. The three were reportedly working out of Thailand because of its cheaper mobile fees. The men, in their mid-20s and early-30s, were charged for illegally working in the country and illegally importing the phones.

“They have been charged with working without work permits because they are on tourist visas and smuggling contraband goods,” immigration officer Colonel Ruengdet Thammana told ABC-CBN.

Police are still trying to figure out how they got a hold of so many SIM cards and iPhones, and who else is involved in the operation.