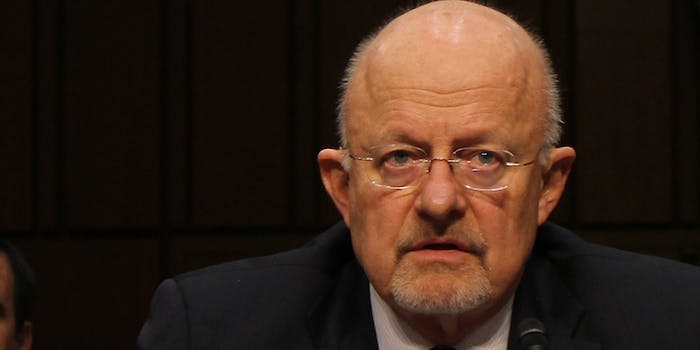 Contrary to earlier news reports, the White House says DNI James Clapper will not head up the NSA review.

The group tasked with reviewing the U.S. National Security Agency’s surveillance programs will not be led by Director of National Intelligence James Clapper, the White House confirmed Tuesday.

At a press conference last week, President Barack Obama announced that the White House would assemble a panel of independent experts to assess whether the agency’s surveillance techniques violate the privacy rights of U.S. citizens.

Yesterday, the administration launched the review board. “I am directing you to establish a Review Group on Intelligence and Communications Technologies,” Obama wrote in a memorandum to Clapper. “[The] Review Group will brief their interim findings to me through the Director of National Intelligence.”

To many, Obama’s memo seemed to indicate that Clapper–who has all but outright admitted to lying to Congress about the NSA’s spying–would be leading the review group. A front-page HuffingtonPost headline wrapped around a photo of Clapper captured the general sentiment: “STEP ONE: LIE TO CONGRESS ABOUT SURVEILLANCE / STEP 2: LEAD REVIEW OF SURVEILLANCE.”

However, White House spokesperson Caitlin Hayden told the Daily Dot these claims are incorrect. “The panel will not report to the DNI,” she said.

“The DNI’s role is one of facilitation, and the Group is not under the direction of or led by the DNI,” Hayden explained. “The members require security clearances and access to classified information so they need to be administratively connected to the government and the DNI’s office is the right place to provide that.”

Hayden reaffirmed Obama’s comments on Friday that the Review board would be made up of independent experts. She said the experts would be selected by the White House in consultation with the Intelligence Community. “We are not in a position to announce the names at this point, but expect to do so soon,” she said.

The review board will give its final report and recommendations by December 15.