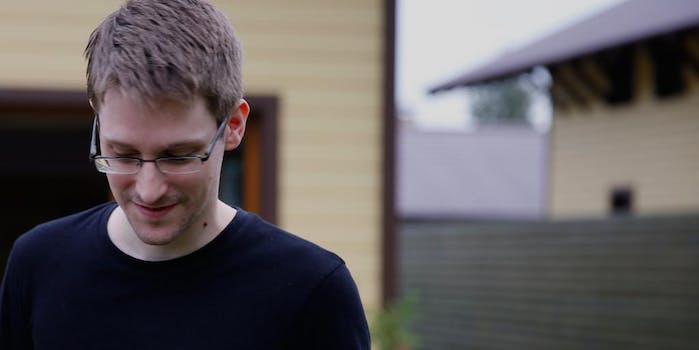 The law kept some of the movie's stars out of the ceremony.

Citizenfour, the Laura Poitras documentary that closely chronicled whistleblower Edward Snowden’s journey across the world and into the worldwide zeitgeist, won the Academy Award for Best Documentary tonight.

Citizenfour has been widely praised for both its film-making and journalism since it first hit theaters late last year, racking up 13 awards prior to its Oscar win. The movie took home Best Documentary at the Independent Spirit Awards earlier this week.

From the moment Snowden began to leak documents from the National Security Agency (NSA) that detailed its mass surveillance on Americans and people from around the world, Citizenfour director Laura Poitras masterfully captured a profoundly important historical moment to an extent never before accomplished in either a journalistic or film context.

We're proud of you tonight @LauraPoitras! Thank you for taking on work that is central to our community. @TorProject @CitizenFour

While this Oscar win is a sign of mainstream adulation for the film, two of its biggest stars couldn’t make it to Los Angeles for the Oscars ceremony for fear of American authorities.

Edward Snowden, the movie’s protagonist and a now-ever-present figure in American politics, has been living in Russia for nearly two years on temporary asylum, wanted for two counts of espionage in the United States.

Jacob Appelbaum, a prolific activist and hacker, is another star of the film who will not come back to the United States. Appelbaum closely assisted Poitras throughout the film, and he is living in Germany due to his work with WikiLeaks and Snowden.

I wish I could be with Laura, Trevor and Glenn at the Oscars. The never ending US Govt harassment of @wikileaks is personally soul crushing.

I hope someday I'll be able to travel freely with Laura in the United States – as the Russians say: "Hope dies last, but it still dies."

Hollywood can’t get enough of the Edward Snowden saga. Oliver Stone is currently directing a feature film starring Joseph Gordon-Levitt. The dramatized movie, shooting now in Germany, is due out in Dec. 2015.

If you missed its stint in the theaters, fear not: Citizenfour will premiere on HBO on Monday night at 9 p.m.