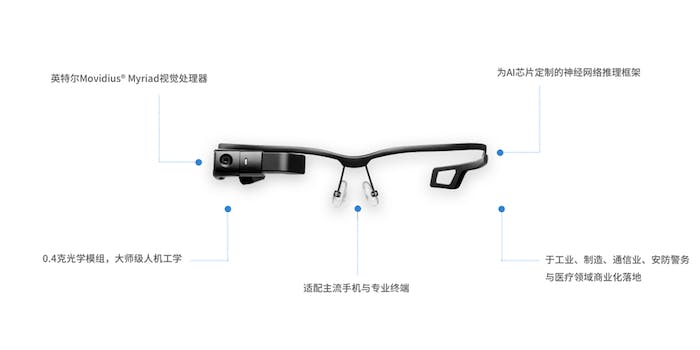 Chinese police are using facial-recognition glasses to hunt down suspects

The shades can identify someone in 1/10th of a second.

A new type of revolutionary sunglasses with facial-recognition technology is helping Chinese police make arrests, and they have serious implications for the future of privacy.

The sunglasses are being trialed during the Lunar New Year at train stations in Zhengzhou, a metropolis in northeast China with a population nearing 10 million. While they look similar to Google Glass, these crime-fighting spectacles route images to a mobile device that contains a database of suspected criminals. The company behind the device, Beijing-based LLVision, told the Wall Street Journal that they are capable of identifying individuals from a 10,000-person database within one-tenth of a second.

According to local media, the intrusive surveillance technique has already been used to capture seven suspects wanted in major cases and 26 individuals traveling with false identities.

China is the leading country when it comes to using artificial intelligence as a surveillance assistant. The country already has the most CCTV cameras installed, with estimates as high as 600 million by 2020. But those wall-mounted cameras suffer from poor image quality and lack the flexibility needed to track suspects on the move. By adding video-recording glasses to its police fleet, China can now quickly grab suspects off the streets before they flee. It also allows them to use facial recognition in areas they otherwise couldn’t view, like dark alleyways and crowded areas where faces are concealed.

It gives police “the ability to check anywhere,” Wu Fei, chief executive at LLVision, told the Journal. “By making wearable glasses, with AI on the front end, you get instant and accurate feedback. You can decide right away what the next interaction is going to be.”

The glasses are connected directly to the handheld device that contains an offline database of criminals, unlike CCTV cameras, which feed their data to a vast database in the cloud where it gets processed to look for a match. Without needing an internet connection, the glasses could theoretically be used anywhere in the country. This flexibility makes them particularly useful in subways and other areas with poor connectivity. The video-recording eyewear costs $636 without the facial-recognition technology installed.

The smart sunglasses predictably raise concerns among privacy advocates who believe it will allow the government to spread its surveillance reach and target minorities. There’s also the distinct possibility that these gadgets incorrectly identify a law-abiding citizen as a criminal.

LLVision claims it vets clients and won’t sell to regular customers until it has an idea of the social impacts its product could have. You may remember, one of the main reasons Google Glass failed was because its built-in camera made people uncomfortable.

China is working on a number of other dystopian surveillance projects. In July, it touted its facial-recognition technology and predictive analytics as a way to warn police of potential crimes, similar to the precogs in Minority Report. The system tracks people’s movements and behaviors to assess how likely they are to commit a crime.