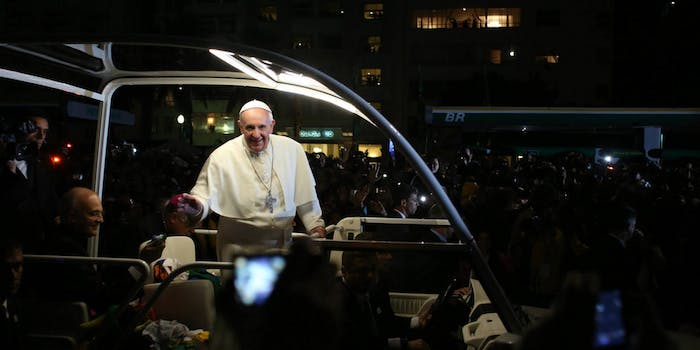 It was a gift from students.

Pope Francis will now be able to capture bird’s eye views of the Vatican thanks to a drone given to him by students in Rome.

Students presented the pope with the gift on Thursday, and customized the unmanned aerial vehicle with the colors of the Vatican flag—yellow and white. In a statement, organizers of the robotic gift-giving said the drone “represented… the values of technology in the service of man.”

Organizers said drones were helpful in documenting the aftermath of a 7.9 earthquake that struck Nepal and surrounding areas last Saturday. For instance, Kishor Rana flew a drone over Kathmandu, the capital of Nepal, to document the homes, businesses, and cultural heritage sites that were destroyed because of the quake.

The drone provided by the students is hardly the most unique thing the leader of the Catholic Church has received. In March, the pope was hand-delivered a pizza while he drove through Naples, Italy, in a motorcade.