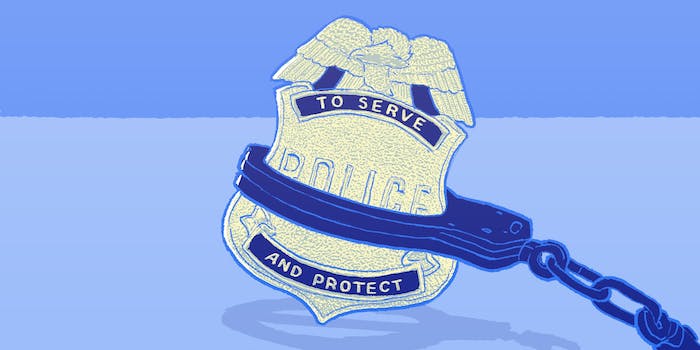 The city refused to release video of shooting for months.

A Chicago police officer has been charged with the murder of 17-year-old Laquan McDonald.

Officer Jason Van Dyke, 37, turned himself in to state attorney investigators on Tuesday morning. He faces a first-degree murder charge for shooting McDonald “without legal justification and with the intent to kill or do great bodily harm,” according to the criminal complaint. The shooting occurred in October 2014.

A judge ordered Chicago officials to release video of the shooting, which was captured on a police dash-cam, according to the New York Times. The city refused to release the video for months. The video depicts Van Dyke firing 16 rounds at McDonald before another officer urges him to stop shooting when Van Dyke went to reload his firearm, according to the Chicago Tribune. McDonald was struck by all 16 bullets, according to the autopsy, and some of the bullets hit him from behind and after he had fallen to the ground.

Authorities said McDonald had a knife, and according to Van Dyke’s lawyer, Dan Herbert, the officer feared for his life. According to the McDonald family’s lawyer, the video shows him moving away from Van Dyke.

In April, the city offered to pay the McDonald family a $5 million settlement before they filed a lawsuit.

Although Herbert said Van Dyke is a highly decorated officer of 14 years, he has also been accused of using excessive force and racial slurs in the past.

Tiffany Van Dyke, the officer’s wife, set up a GoFundMe campaign to raise money for her husband’s defense. According to NBC Chicago, the campaign raised more than $10,000, but it has since been shut down.

“My husband is having a bond hearing and if we do not raise this money he will be detained on 11/24/15,” Tiffany Van Dyke wrote on the GoFundMe page. “With the holidays approaching our husband and father needs to be home with his family. I sincerely thank you in advance for your kind donation. I do not want to have to fight this battle alone nor can we afford to fight it.”