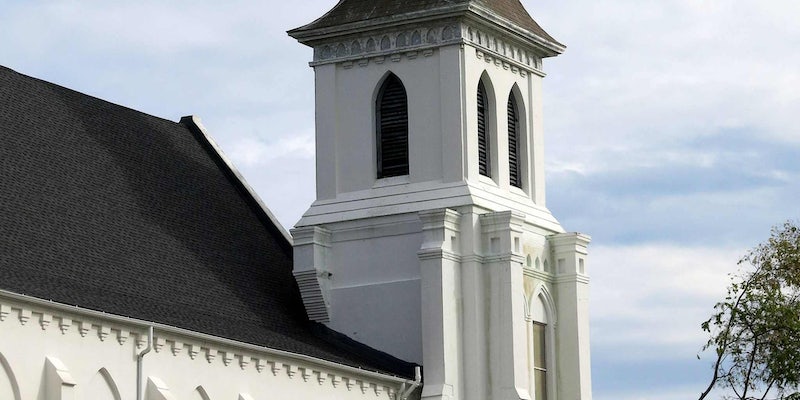 Among those dead is the church's 41-year-old pastor.

Nine people were killed late Wednesday night when a white gunman opened fire on a historic black church in Charleston, South Carolina, in what police are treating as a hate crime.

Police said at a Thursday morning news conference that six of the victims were women and three were men. The shooter, who sat in church with his victims for an hour before killing them, fled the scene, and a manhunt is now underway. The FBI is assisting local and state police.

The shooter, described as a “younger white male” aged 21 to 25, standing 5’9” with a slender build, was caught on a surveillance video that has been released in an effort to find him. The shooter described as “armed and dangerous.”

This is the surveillance photo I was just referring to on @myfox8. Police say he is armed and dangerous #Charleston pic.twitter.com/jnQDNAYMeG

Anyone with information about this incident call 1-800-CALL-FBI. pic.twitter.com/EidJGhNEDp

The Emanuel African Methodist Episcopal Church is a 199 year old congregation with roots in the pre-Civil War abolitionist movement. The Charleston police chief said at the news conference that there was “absolutely no doubt in my mind it is a hate crime.”

The church’s pastor, 41-year-old Reverend Clementa Pickney, was among those killed Wednesday night. He was a Democratic state senator who had been serving since 2000, when he became the youngest African American ever elected to the legislative body.

Pickney began preaching at 13 and had been the church’s leader since 18. He recently campaigned for police to wear body cameras. He’s survived by his wife and two daughters.

“I see everything I do as an extension of the ministry,” he said in a 1999 interview with the Savannah Morning News. “It’s all about service. In the community, in the African-American community, one person ought to say something and that is the minister. The minister is paid by the people. He doesn’t work for a big company. He doesn’t represent a particular special interest.”

The news circulated rapidly online after the shooting occurred.

Helicopters soaring overhead in charleston right now. This from my roof couple blocks away pic.twitter.com/wsm2db74KT

The #NAACP is talking to our leaders on the ground re the shooting reported at church in Charleston, SC. https://t.co/ZGsbnNjKaw

Heart is breaking for Charleston and South Carolina. My prayers are with Emanuel AME and Pastor Pinckney.

Hearing 9 confirmed deceased from the #chschurchshooting. Absolutely horrific. Devastated for the victims & their families. #prayforchs

There was also criticism of major media outlets for not hitting the breaking news quickly enough.

Photo via ParkerHiggins/Wikipedia (CC BY SA 2.0)