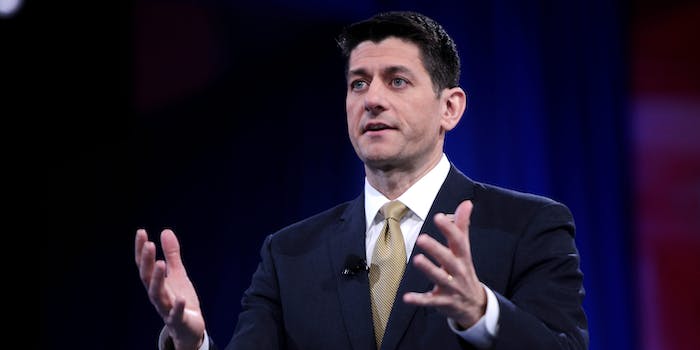 Did Paul Ryan ask the House chaplain to resign after praying for the poor?

Former House Chaplain Father Patrick Conroy said on Thursday that Speaker Paul Ryan (R-Wisc.) told him to “stay out of politics” after he prayed for balanced benefits and equality on the House floor as the chamber debated tax reform.

“A staffer came down and said, ‘We are upset with this prayer; you are getting too political,’” Conroy told the New York Times. “It suggests to me that there are members who have talked to him about being upset with that prayer.”

The prayer was said in November during a debate about overhauling the tax code.

“May all members be mindful that the institutions and structures of our great nation guarantee the opportunities that have allowed some to achieve great success, while others continue to struggle,” Conroy prayed. “May their efforts these days guarantee that there are not winners and losers under new tax laws, but benefits balanced and shared by all Americans.”

On April 15, Conroy resigned after working for the House since 2011—but in his letter to Ryan, he eluded that it was because Ryan had asked him to.

“As you have requested, I hereby offer my resignation as the 60th Chaplain of the United States House of Representatives,” Conroy wrote. He also confirmed to The New York Times that he was asked to leave.

“I certainly wasn’t given anything in writing,” he said. “Catholic members on both sides are furious.”

While Ryan’s spokeswoman, AshLee Strong, denied that Conroy was asked to resign, members of both political parties in the House are concerned. A bipartisan group of House members is drafting a letter to Ryan, asking for an explanation. Four sources, two from each party, told the Hill that Conroy said he was told that he “must retire or that he would be dismissed.”

Members of Congress have also tweeted their concerns.

I’m very sorry Father Conroy was forced to resign as a House Chaplain. He is a good man. No explanation and no consultation. https://t.co/19Ih61qxLw

If Paul Ryan had a problem with Fr Pat Conroy’s prayer about tax reform and the poor then he will really have a problem with the New Testament. @sullivanamy

He was fired by @SpeakerRyan.

We need to know if this was about politics. https://t.co/bJxK6sL6nu

Elected officials aren’t the only ones upset about the alleged ousting of Conroy. Others have tweeted that it was inappropriate to fire a priest for praying about income inequality.

Paul Ryan likes to use the cover of Catholicism to sell his politics, but when members of Catholic orders (like Father Conroy or Sister Jordan last year) push back, Ryan tells them to mind their own business. https://t.co/Q32w36Hz4K

The decision by @SpeakerRyan to oust Father Conroy is a great disservice to the body and to our nation. It is my hope that he will soon provide answers as to why this decision was made. Based on early press reports, I share the concerns of many.

.@SpeakerRyan forcing the Chaplain of the House of Representatives, the Rev. Patrick Conroy, to resign shows how many like their religion: unchallenging, uncritical, and unChristian.

Father Conroy was a priest at my high school and he was amazing, full stop. Cared for the marginalized, thought outside the box, and was tirelessly a promoter of looking after the marginalized.

Conroy’s last day as chaplain will be May 24.