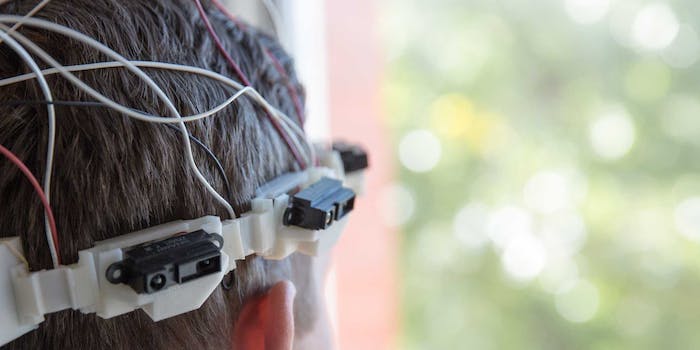 From dragon slaying in virtual reality to a zipper that will message you when its down, technology fantasy land Chaotic Moon showcased the future this week.

Each year during the SXSW technology and entertainment festival, the creative technology studio in the heart of downtown Austin, Texas demos innovative technology products that, while mostly still in early stages, may eventually become tech we integrate into our lives.

One such gadget is Sentiri, a headband with haptic feedback built for the visually impaired. Sentiri features an array of eight infrared cameras, spaced equally and surrounding the user’s head. Constantly scanning the environment for movement or objects, the cameras send data to a microprocessor at the back of the headband, and gentle vibrations from haptic disks on the headband tell a person wearing it which direction they should move in.

To discern the layout of objects in an environment, the infrared cameras send light out and sensors measure the time it takes the refraction to come back to the sensor. Based on how fast the light is moving, the computer can tell how far away certain objects are.

Sentiri can also be controlled remotely on an iPad application via Bluetooth. A controller taps an image that corresponds to the sensors on the band and causes vibrations that point the wearer in the right direction.

Matt Murray, creative technologist at Chaotic Moon and developer and designer of the project, said that the team tried out the headband in an obstacle course, both self-steered and controlled remotely. Each wearer completed the course while a second individual navigated, and 75 percent successfully completed it by themselves. “We really just trying to find unique ways of problem solving that shows what we’re capable of,” Murray told the Daily Dot. “If someone’s watching a video or seeing something passively they might think: ‘What if we did this and what would the ramifications be?'”

Murray explained he was inspired to make Sentiri after watching YouTube videos about the visual assistance options for visually impaired individuals, and investigating other products on the market. For instance, MIT recently developed a navigation system worn around the neck that communicates with a handheld braille controller.

The prototype being demonstrated was built in two weeks, so it’s nowhere near a consumer-ready product, but it does showcase the potential of wearables that support the visually impaired.

The virtual reality projects showcased during SXSW were much further in development, and the immersive adventure was unlike any I had experienced before.

Set up in a glass room in the middle of the Chaotic Moon studio, a large square box outlined in tape set the boundaries of the VR world. I donned an HTC Vive headset, wrapped the motion controllers around my wrists, and was tasked with building a weapon to slay a dragon.

The game world took over my senses, with giant headphones feeding audio of growling, fireballs, and other in-game noises that enhanced the experience. The motions to pick up objects to add to the weapon were so precise, I could see my virtual hand adding cranks and spears to it in virtual reality.

Each time the dragon spit fire at me, I ducked instinctively.

Though the game was fun and surprisingly life-like, Chaotic Moon’s VR technology is primarily designed for companies that want enhanced virtual training, Chad Darbyshire, Chaotic Moon’s vice president of marketing and innovation, explained. Individuals who work in high-pressure environments like firemen, pilots, oil rig operators, or military positions, can be fully immersed in tense situations before experiencing it in real life.

There was no perceptible lag on the HTC Vive, and the game required me to bend over and pick things up, place them in locations above me, pull levers, and aim a weapon at a dragon. Unlike other VR tech I’ve tried that feels unnatural and slow, I actually felt like I was in a virtual box with the dragon.

Chaotic Moon showcased nine new technologies in total this year. Last year, before being acquired by Accenture in July 2015, the company demoed fire-spewing drones. This year things were fiery, but in a more virtual sense.