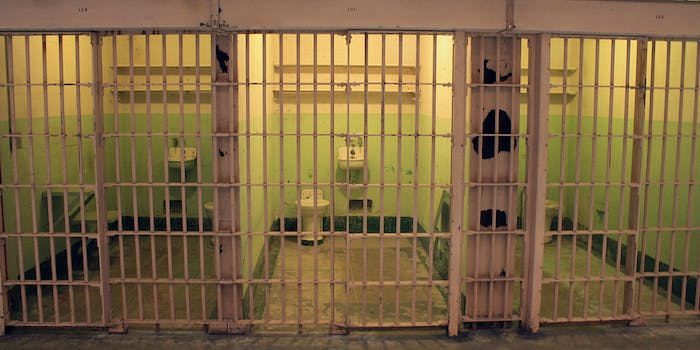 Can you go to jail for sharing Jennifer Lawrence’s nude photos?

Over the weekend, the Internet exploded after an anonymous hacker posted stolen nude pictures of a gaggle of female celebrities

While some of the affected celebrities, such as actress-singer Victoria Justice, have claimed the photos are fakes, others, like actresses Jennifer Lawrence and Mary Elizabeth Winstead, have admitted the stolen shots are the real deal.

If the identity of the hacker is ever discovered, that person will likely find himself in legal hot water. But what about all the other Internet users who helped the images spread across the Web? Could someone go to jail or get sued for sharing any of the stolen photos online or putting them on their own personal webpage? The answer, it turns out, is far stickier than it might seem.

If the leaked photos in question were of gymnast McKayla Maroney, the answer is most decidedly yes. The photos of Maroney were allegedly taken when she was under 18, making them child pornography, which is illegal to either host or distribute in any way. When the Reddit community dedicated to the leaks, r/TheFappening, discovered this fact, there was a massive collective effort to expunge any trace of the offending photos from users’ hard drives.

Of course, most of the images in the so-called “Celebgate” stash did not depict underage girls. So what about the pictures of adult leak victims, like actress Jennifer Lawrence?

In a statement to gossip blogger Just Jared, a spokesperson for Lawrence indicated that legal action against anyone who shared the photos could be forthcoming. “This is a flagrant violation of privacy,” the spokesperson insisted. “The authorities have been contacted and will prosecute anyone who posts the stolen photos of Jennifer Lawrence.”

The threat isn’t entirely idle. Hacktavist journalist Barrett Brown was essentially thrown in jail for sharing a link to a site containing stolen credit card information. While those charges were eventually dropped, and Brown ended up pleading guilty to lesser crimes, he originally faced over a century in prison primarily for sharing a link.

In other words, it’s possible—but unlikely—that anyone who shares links to the stolen Celebgate images could face prosecution, as Lawrence’s spokesperson claims. But the chances are infinitely greater for website operators who knowingly host the offending images.

Of course, purging the Internet of the photos entirely is futile. However, there are some things the injured parties can do. The most effective involves doing something that many of the targeted celebrities have been loathe to do: admit that the photos are real.

Richard Assmus, an intellectual property attorney at the law firm of Mayer Brown, explains that copyright for a photo automatically vests in the person who took a it, unless agreed to otherwise. Some of the photos were selfies, meaning the subject also holds the copyright, but others were presumably taken by the celebrities’ romantic partners. In the latter case, the copyright would be held by the person who took the photos, but could easily be signed over to the celebrity.

?When it comes to copyright, the obscenity part doesn’t matter,” Assmus insisted. ?These photos could be of the view from someone’s apartment window overlooking Central Park. What matters is that they’re copyrighted.”

By asserting copyright authority, the affected celebrities could force any site hosting the leaked photos to remove them or face serious legal consequences if they don’t. Under the Digital Millennium Copyright Act (DMCA), sites aren’t held liable for pirated content uploaded by users as long as they make a good-faith effort to take that illegal content down when its presence is brought to their attention.

While the affected stars would likely have to go down to the U.S. Copyright Office and register the sexy selfies as belonging to them, Assmus noted that simply asserting copyright protection and accusing a site’s administrators of violating that copyright will likely be enough to get the offending photos taken down.

There is some precedent for this strategy. In the 2012 Scarlett Johansson nude photo hack, the Avengers star’s lawyers started reaching out to sites hosting her pictures almost immediately, demanding they be removed on the basis that, as the photographer, Johanssen held the copyright. While it required the star to admit the nude photos were indeed legitimate, the strategy got a number of sites to remove the photos.

Even without the public threat of copyright violations, some photo-hosting sites, such as Imgur, are taking steps to remove the Celebgate photos as they are uploaded by users, whereas others seem to be keeping the pictures up.

Sites like Reddit, which has become a central hub for sharing the images, aren’t actually hosting any of the leaked photos; instead, the site is simply acting as a conduit directing readers to other sites where the content is hosted. Providing links to copyrighted material has been argued as being ?secondary infringement” under the DMCA, but without much success.

Earlier this year, director Quentin Tarantino sued Gawker over a story posted by the gossip blog that linked to another site where readers could read a leaked early draft for the script Tarantino had written for his upcoming film The Hateful Eight. Tarantino’s suit claimed that Gawker pointing people to the leaked script hurt the film’s potential box office revenues, while Gawker insisted it was simply reporting on the news about the script leak as any news organization would. A federal judge dismissed the suit, but Tarantino subsequently refiled.

Sharing in the clear

According to Assmus, however, suing, or even threatening to sue, sites or even individuals that shared or linked to the nude pictures is not the best way to go.

Even so, Reddit, appears to be trying to walk a middle ground on how hard it wants to promote the pictures. The site is allowing the posts with the photos to stay up, but has effectively blocked the entire r/TheFappening subreddit from appearing on the site’s front page for people who haven’t specifically subscribed to the community.

It should be noted that this limit on exposure has done nothing to put a damper on the amount of traffic r/TheFappening has been getting. The subreddit racked up over 9 million unique views on Monday alone.

As mentioned, some of the targeted celebs, such as singer-actress Victoria Justice, have maintained that the photos are fake:

These so called nudes of me are FAKE people. Let me nip this in the bud right now. *pun intended*

Even if the photos are fakes, and therefore not subject to the copyright on the part of the person pictured or their partner-photographer, someone in Justice’s position does technically have another avenue for going after a site hosting the photos.

Celebrities have gotten litigious over much more seemingly innocuous ?right of publicity” issues than a site monetizing their fake nude pictures. Actress Katherine Heigl recently sued drug store chain Duane Reade over a tweet made by the company that featured a paparazzi photo showing her walking out of one of the company’s store accompanied by the message, ?Love a quick #DuaneReade run? Even @KatieHeigl can’t resist shopping #NYC’s favorite drugstore”.

Heigl, who is not a Duane Reade spokesperson, initially demanded $6 million in damages but eventually settled the suit out of court.

Revenge, with a twist

She adds that the nude pictures of Celebgate present a double-edged sword. On one side, there’s infinitely more public interest in seeing the stolen pictures than there is for the average clients she sees on a regular basis. But, at the same time, there’s far more wealthy, connected famous people can do about the spread of their pictures online.

“Celebrities have much greater financial resources at their disposal than the average Jane Doe,” Goldberg said. ?If they want to, they can file expensive lawsuits. They have the ear of regulators and legislators. The FBI said its actually investigating this hack.”

?I have a 16-year-old client who is the victim of exploitation, who I’m representing pro bono,” Goldberg continued. ?An anonymous person has nude pictures of her and says he or she will release them if she doesn’t send more, and I can’t tell you how many times I’ve called trying to get the attention of the FBI, which hasn’t been responsive.”

Photo via miss_millions/Flickr (CC BY 2.0)