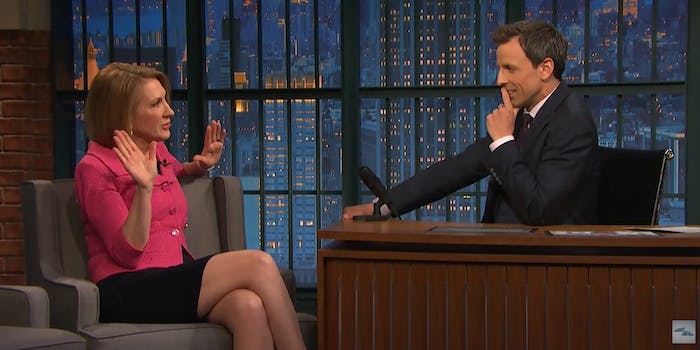 Was this joke funny, or just creepy?

Within hours of announcing her plans to run for president, former HP CEO Carly Fiorina ran into her first stumbling block: carlyfiorina.org.

The domain had already been bought by someone else and set up to draw attention to the 30,000 people whom Fiorina had laid off as CEO.

Fiorina visited Late Night with Seth Meyers to talk about the domain-name gaffe, describing it as “Kind of funny, actually.”

“Do you know who owns sethmeyers.org?” she joked. “I do. I just bought it in the green room, actually. So you’d better be really nice to me tonight.”

Indeed, if you go to sethmeyers.org right now, it redirects to Fiorina’s campaign website.

While Fiorina was clearly trying to laugh off her own website issues, this joke feels kind of weird. There’s something creepy about a presidential candidate buying up a TV host’s domain name and jokingly threatening the host with it—especially if that candidate is trying to dispel her public image as a rich and powerful businesswoman who laid off tens of thousands of employees.