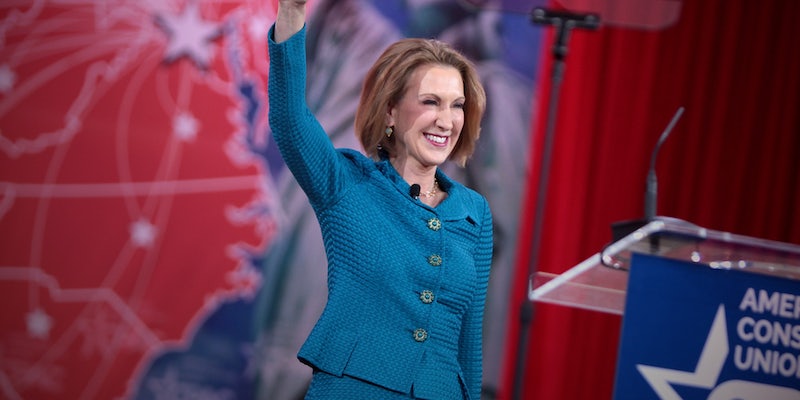 ‘A feminist is a woman who lives the life she chooses and uses all her God-given gifts.’

Carly Fiorina, the one Republican presidential candidate with tech business experience, as well as the only woman in that race, has formally suspended her campaign.

In a long message posted to her Facebook wall Wednesday afternoon, Fiorina stressed her message of Republican feminism: That women should feel free to choose their own path in life, and that strong, hardworking women can be leaders. “To young girls and women across the country, I say: do not let others define you,” she said. “A feminist is a woman who lives the life she chooses and uses all her God-given gifts.”

Though she often cited her experience as the former CEO of Hewlett-Packard as evidence she’s both a capable outsider and has tech savvy, Fiorina’s experience before she was fired has received substantial criticism.

Though she has some adamant supporters, Fiorina never did well in the polls. She was notably left out of the most recent Republican debate in New Hampshire, even though she did better in the Iowa caucus than New Jersey Gov. Chris Christie and Ohio Gov. John Kasich, who were invited, as Fiorina polled polled less than 5 percent nationally.