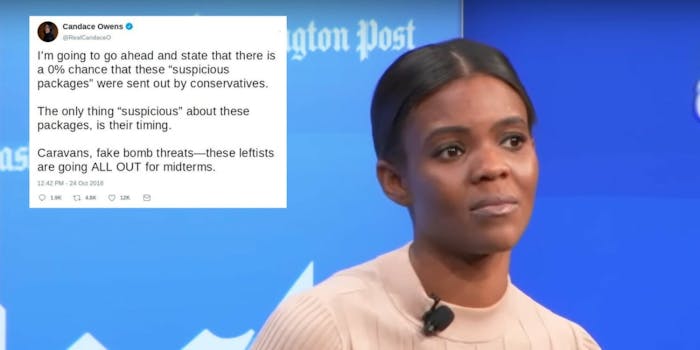 Liberal pundits are calling out right-wing commentator Candace Owens for quietly deleting a tweet posted days ago in which she framed the series of bomb threats against prominent Democrats as a false flag.

At the time, Owens was just one of many on the right suggesting that rather than a coordinated terror campaign against critics of President Donald Trump, the incidents were part of a liberal conspiracy to frame and damage conservatism ahead of the midterm elections in November.

“I’m going to go ahead and state that there is a 0% chance that these ‘suspicious packages’ were sent out by conservatives,” Owens wrote on Wednesday. “The only thing ‘suspicious’ about these packages, is there timing. Caravans, fake bomb threats—these leftists are going ALL OUT for midterms.”

With that, Owens deleted her tweet without explanation, but not without the move being noticed and publicly blasted.

.@RealCandaceO deleted this tweet. Don't let all the conservatives who spread this dreck memory hole what they did. pic.twitter.com/nB9Lkv17WH

Hey @RealCandaceO , seeing as how the mail bomber has been identified, I thought you might want to see the tweet you deleted. I kept it for safe keeping. Hope you are having a great day misinforming and manipulating the naive minds who SOMEHOW take you serious. pic.twitter.com/vIevcfB70U

This tweet from @RealCandaceO is the very reason why I didn’t want to play the game of predicting who the #MAGAbomber was or wasn’t.

This tweet she wrote, saying that a 0% chance existed that he was a conservative was shared nearly 15,000 times.

She just deleted it. pic.twitter.com/kaKzE5UmtJ

While Owens has at least deleted her comments, some conservatives have justified their inaccurate claims.

There was every reason to doubt that the bomber was a legitimate Trump supporter before we knew anything about him. But now that we do have info on him, it would be kooky conspiracy theory territory to stick with the "false flag" hypothesis. Clearly the guy is just a nut.

Sayoc was charged on five federal counts, including mailing explosives, and threatening past presidents.