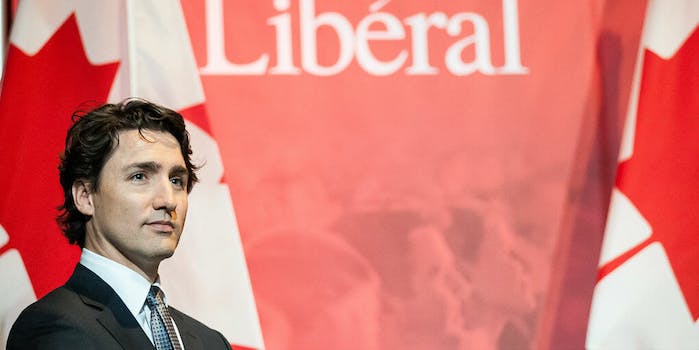 Lumber and dairy are historic points of contention for the U.S. and Canada.

Amid a trade dispute with President Trump, Canada has chosen to respond on Twitter by highlighting its friendly relations with Asia instead. It’s fitting—the spat began with a combative tweet from the president.

Trump began by accusing Canada of stifling the northern border’s farming economy. Tensions escalated when Trump announced Monday an initial duty of up to 24 percent on Canadian softwood lumber, with more expected later this year.

Canada has made business for our dairy farmers in Wisconsin and other border states very difficult. We will not stand for this. Watch!

Historically, lumber and dairy have always been points of contention between the countries, leading to tariffs, trade litigation, and settlements. Yet Canada continues to emphasize just how much business is being done with the country:

Canada is working hard to boost exports of Canadian #softwoodlumber to #China. pic.twitter.com/ivOoGT000p

Canada is an important supplier of pulp, paper and wood to #China. Check out all of our top exports to China pic.twitter.com/hjpYXkgyUN

“This is caused by a protectionist industry in the U.S.,” Champagne said in an interview. “My answer to that is we are looking at all sorts of options to obviously support our industry.”

Prime Minister Justin Trudeau spoke on the issues over the phone with Trump on Tuesday.

“On the issue of softwood lumber, the prime minister refuted the baseless allegations by the U.S. Department of Commerce and the decision to impose unfair duties,” the statement said. “The two leaders agreed on the importance of reaching a negotiated agreement, recognizing the integrated nature of the industry between Canada and the United States.”