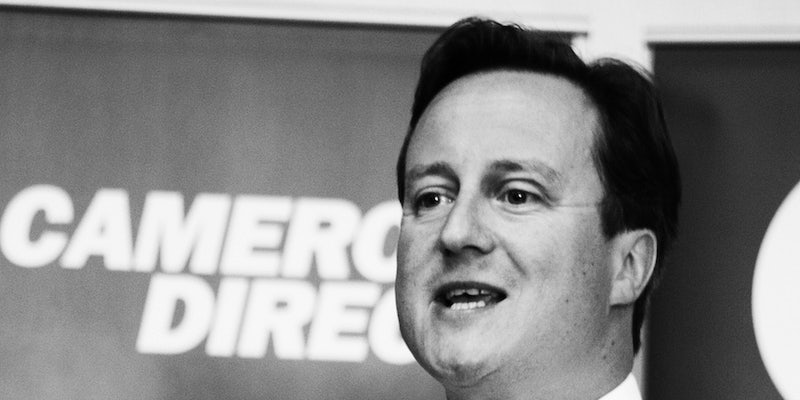 The Wall Street Journal may have been duped by a fake Joan Didion on Twitter, but then the paper and author were never all that close. It’s an entirely different matter for U.K. Prime Minister David Cameron—or whoever runs his Twitter account—to mix up his actual cabinet colleague with a satirical gloss on the same man.

The Tory leader attempted to remark upon the work of fellow Conservative Iain Duncan Smith, a former opposition leader and current secretary of state for work and pensions:

We’re rolling out a cap on Benefits today – @IDS_MP and I are determined to make work pay, and help the UK compete on the #GlobalRace.

Problem was, it wasn’t the real Iain Duncan Smith, who doesn’t even seem to have a Twitter account. The @IDS_MP account, moreover, includes the phrase “Parodia Spucatum tauri” in its description: Latin for, quite literally, “bullshit parody.”

The author of @IDS_MP tends to lampoon the Cameron administration’s attitude of callous privilege in the face of economic crisis and their willful ignorance of lower-class reality.

A thrifty way to keep cool in this heat wave is to dab the ice from your Champagne bucket onto your forehead.

He replied to Cameron, though indirectly, with typical boozy insouciance.

Chin chin Dave. Round mine for a Pimms later?

The Independent shortly thereafter confirmed the comedian’s identity but did not divulge much about him: @IDS_MP is controlled by “a 42-year-old Army veteran from Berkshire.”

“David Cameron uses Twitter to try and seem cool but it massively backfired on him,” said the man, who did not want to be named but confirmed his ownership of the @IDS_MP account by favouriting a specified tweet on request. …

“It was just a bit of a dig,” he explained. “A bit of fun. I try not to take Twitter too seriously and it’s always good to poke fun at our MPs. Times are quite difficult, the country’s in a mess and I get quite angry with a lot of things. It’s a way of expressing myself.”

A day after the gaffe, Cameron—who noted late last year that being on Twitter has exposed him to a torrent of abuse, not that anyone expressed much sympathy—had not deleted the tweet in question, presumably because he’d fired the intern who knew how.