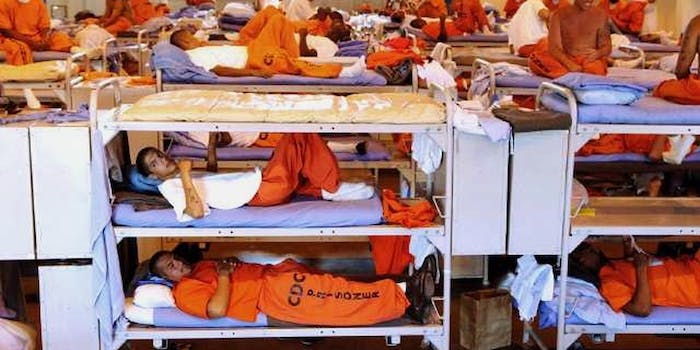 California’s prison overcrowding problem is personal for this redditor

The Supreme Court has ordered California to fix its jam-packed prisons. This redditor experienced them firsthand.

It was Dec. 3, 2005, and Reddit user poundforpoundfl was partying in a classy apartment building closed for renovations with 11 of his friends and some squatters. It was his birthday, and little did he know that his special guests were about to arrive.

“No sooner than I started saying peace to the ‘residents,’ the Los Angeles SWAT team kicked in the doors to every apartment on the entire floor and arrested like 40 or 50 people total,” poundforpoundfl wrote on Reddit in a thread called “Overcrowding in California prisons.” “[T]urns out there were squatters in every apartment on the floor, it was an entire community and the fuzz had caught wind of it. So it’s off to LA County for my first adventure in jail.”

Poundforpoundfl spent the next three weeks elbow to elbow with some of California’s most hardened criminals. He was poked, prodded, and threatened with violence daily. He was charged with numerous felonies. His bail was set at $175,000.

“I got transferred to what I can only describe as an ‘open dorm,'”poundforpoundfl recalled. “The walls were a pale shade, everybody had green jumps on … So after a day in this crowded dorm, which probably comfortably housed 150 guys but had 225 or so in it … I got beat up pretty good once in the chow line for muttering a ‘fuck off’ after my slap to the head.”

Poundforpoundfl’s experience is one faced daily by thousands of inmates in California’s overcrowded prison system.

Since 1970, “America’s incarceration rate (including county jails) rose roughly fivefold, to 756 per 100,000 people,” the Economist reported. During this same time, California built more than 20 new prisons which have a combined capacity of about 100,000. Today, they house more than 170,000 people, the Associated Press reported. This has resulted in horrific living conditions captured in the following photographs posted on Reddit’s r/WTF section. (The photos were originally posted on the photo sharing site Imgur, where they have collected more than 446,000 views.)

After serving his time and paying a fine, poundforpoundfl was released on Christmas Eve.

“Basically, we got lost in the system, forgot about, and it takes so long to get your case back to court out there from it being so backed up and overcrowded, that people just forget about you,” poundforpoundfl added.

In May, California Gov. Jerry Brown unveiled a plan to comply with a Supreme Court order to reduce overcrowding. State officials hope to decrease the prison population by 10,000 this year by “slowing the rate of return for inmates held in out-of-state prisons, leasing beds from larger county jails, increasing good-conduct credits for nonviolent inmates and housing more inmates at firefighting camps,” the Mercury News reported.

Poundforpoundfl has since moved from Los Angeles to Florida. He has not been arrested since, and is now writing a book including snippets of his experience.

“I work for a consumer rights firm and partner with three lawyers, so I’m not the little punk I was then,” he added. “It was definitely a crazy few weeks, and a crazy time in my life, that’s for sure.”