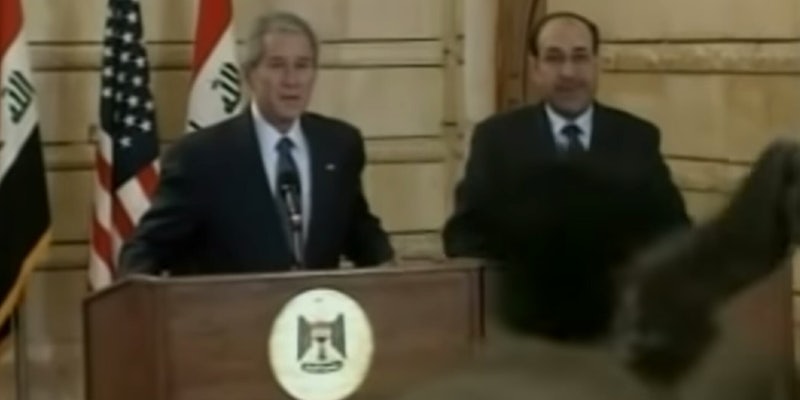 The guy who threw his shoes at George W. Bush just endorsed Mike Gravel for president

We are honored to support your campaign with a promise to change the policies of the White House in the Middle East and Iraqi
يشرفنا دعمك في حملتك بوعد ان تغير سياسات البيت الابيض في الشرق الاوسط والعراق https://t.co/znjwNT2xZK

After the shoe-throwing incident, al-Zaidi was arrested and received a three-year prison sentence. He was released on September 15, 2009–nine months after his incarceration–on the grounds of good behavior, and also because he had no previous criminal record.

Al-Zaidi committed the act as a form of protest against U.S. military occupation in Iraq.

“This is for the widows and orphans and all those killed in Iraq,” al-Zaidi shouted as he threw the second shoe.

Former Alaskan Senator Mike Gravel ran for President in 2008 as a vehemently anti-war candidate and has said, of his 2020 campaign, that “the goal will not be to win, but to bring a critique of American imperialism to the Democratic debate stage.” It is for this reason that the endorsement seems to be a match made in heaven.

The Mike Gravel campaign is proud to announce that we've been endorsed by @muntazer_zaidi, most famous for throwing his shoes at George W. Bush. Thank you, Muntadher! https://t.co/sChNL3BfVy

The 88-year-old’s 2020 venture began as the brainchild of two New York teens, and it has been chock-full of memes since its inception. However, as the campaign continues and endorsements like this begin to accrue, it is clear that Gravel is seeking to prove that his campaign isn’t a laughing matter.