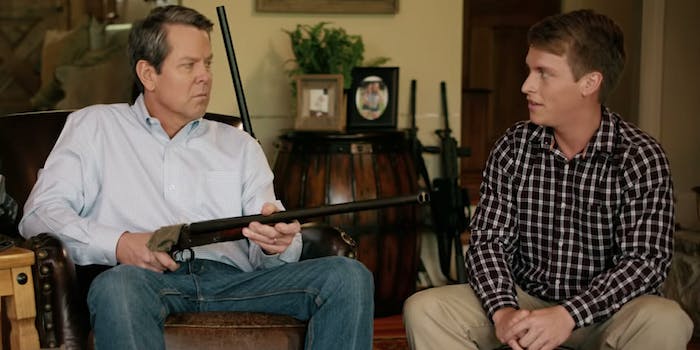 The ad has drawn a lot of scorn online.

Brian Kemp, a Republican running for governor in Georgia says people are “losing their minds” after he ran an ad where he aims a gun at a teenager.

The ad is supposed to highlight the candidate’s stance on the Second Amendment. The way he did it, however, has drawn criticism online.

The ad shows Kemp—sitting in a room filled with guns—holding a shotgun while speaking to a teenager called “Jake,” who is interested in dating his daughter.

The ad starts by saying how Kemp wants to “cap government spending,” “cut regulations,” and “make Georgia #1 for small business”—typical Republican ad fare.  However, when the conversation turns back to “Jake” things get weird.

The teenager says Kemp told him to have a “healthy appreciation for the Second Amendment” if he wants to date his daughter, before cocking the shotgun and aiming it at “Jake.”

“We’re gonna get along just fine,” the candidate says before the ad ends.

Besides the obvious patriarchal implications about the gun-touting dad being overly protective of his daughter situation, Kemp’s ad comes just a few months after 17 people were killed—including teenagers—at Marjory Stoneman Douglas High School in Parkland, Florida.

Many people responded to the ad on his Facebook page and expressed outrage.

“What a disgusting, disgraceful display. What, were not enough teenagers being gunned down for your tastes, Brian?” one person wrote.

“Conservative Republican here. Georgia native. Voter. This video is an embarrassment to me, my state and our party. You will not get my vote. Thank you for revealing yourself,” another person added.

The candidate apparently doesn’t think the criticism of the ad is warranted.

“Liberals in the media are losing their minds off a fake controversy. The real problem they have is that I’m an unapologetic conservative & proud defender of the 2nd Amendment. I won’t back down, cave in, or compromise my values,” Kemp wrote on Twitter, ending it was a #MAGA hashtag.

Liberals in the media are losing their minds off a fake controversy. The real problem they have is that I’m an unapologetic conservative & proud defender of the 2nd Amendment. I won't back down, cave in, or compromise my values. https://t.co/da2uACcq2w #gapol #gagop #tcot #maga

In another tweet, he told his critics to “get over it!”

That’s one way to deal with criticism.