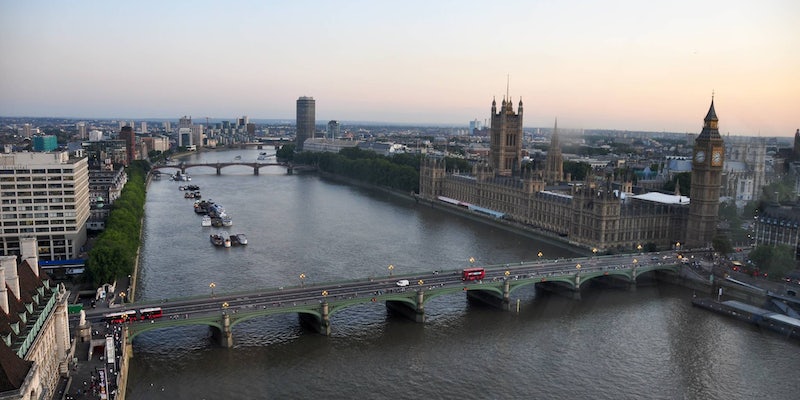 Britain's debate about EU membership has turned into a farcical standoff between boats on the river Thames.

On June 23, the British public will vote on whether they should leave the European Union. The debate over the so-called “Brexit” referendum has heated up over the past few weeks, culminating in a bizarre, watery standoff on the river Thames.

In a show of support for the Vote Leave campaign, a flotilla of fishing boats set off along the Thames on Wednesday morning. Not to be outdone, a group of pro-E.U. campaigners—led by aging rock star Bob Geldof—decided to organize an opposing flotilla.

The resulting standoff is currently the toast of Twitter, unfolding as campaigners shouted insults at each other from dinghies circling the water in central London. It’s hard to see how any of this could possibly persuade anyone on either side of the debate, because the whole thing is a farce.

UPDATED WITH THEME TUNE: The state of British politics summed up in a clip of a flotilla face-off pic.twitter.com/wK9PKylmJN

Led by Nigel Farage, the leader of the right-wing U.K. Independence Party (UKIP), the original flotilla was planned as a show of support for the British fishing industry. It consists of 35 boats representing the Scottish “Fishing for Leave” campaign, aiming to travel along the Thames under Tower Bridge and past the Houses of Parliament.

Nigel Farage has turned up to take control of the flotilla, arriving on an open top bus playing The Great Escape theme.

Thames: MEP Farage suddenly interested in fisheries. Pity he only attended 1 of 42 meetings of EU fisheries committee of which he's "member"

In the words of the BBC, the two opposing flotillas engaged in “light-hearted skirmishes, including the exchange of hose fire.” When Bob Geldof began to play loud music on the sound system of his boat, some of the Leave fishing boats tried to drown out the noise by blaring their horns.

A #fishingforleave vessel uses its hose to repel In campaigners to cries of "soak them" from the Ukip flagship. pic.twitter.com/nw0mCpZSJ1

There’s a strong possibility that this is all a transparent excuse for a group of middle-aged men to have a water fight in front of the Houses of Parliament.

Brexiteer shouting at tourists on Westminster Bridge: "Hitler did it with gas. Merkel is doing it with paperwork!" pic.twitter.com/HqijeII8OJ

A man from Brietbart is shouting "who paid for your boat" at a protest boat full of Vice journalists and this is the future then.

Conveniently, a lot of the boats had at least one journalist onboard. And since this all went down in the middle of London, thousands of people were live-tweeting the debacle from the banks of the Thames as well—a truly historic moment in British politics.

Harbour Master is frantically gesturing at the Geldof boat. Geldof is screaming. Someone just accused a dinghy of being from Goldman Sachs.

One of the stars of of the day was David Coburn, a controversial member of the UKIP and one of Scotland’s six elected representatives at the European Parliament. His claims to fame include comparing a Scottish Muslim government minister to a convicted terrorist, and describing same-sex marriage campaigners as “Equality Nazis,” despite being openly gay himself.

"This is what real fishermen look like!" bellows David Coburn to Remain, gesturing with a glass of Sauvignon blanc in one hand

This combination of political protest and Monty Python-esque slapstick was timed to coincide with Prime Minister David Cameron‘s final open Q&A with parliament before the E.U. referendum next week. Even during 2016’s tumultuous presidential election, it seems that America still hasn’t cornered the market on ludicrous political stunts.