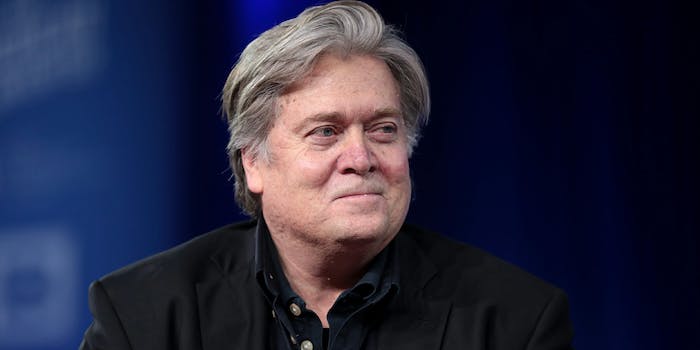 Bannon’s attacks on the president may cost him Breitbart

In a Guardian preview of a forthcoming book by Michael Wolff, entitled Fire and Fury: Inside the Trump White House, it was reported that Bannon described Donald Trump Jr.’s meeting with several Russians during the 2016 presidential campaign as both “treasonous” and “unpatriotic.”

“They’re going to crack Don Junior like an egg on national TV,” Bannon told the author in response to questions about the investigation into the Trump campaign’s alleged collusion with Russia. In the excerpt, it appeared that Bannon took a backhanded shot at Breitbart’s importance.

Bannon went on, Wolff writes, to say that if any such meeting had to take place, it should have been set up “in a Holiday Inn in Manchester, New Hampshire, with your lawyers who meet with these people”. Any information, he said, could then be “dump[ed] … down to Breitbart or something like that, or maybe some other more legitimate publication.”

The comments prompted a blistering response from the president, who slammed his former aide as having “lost his mind.”

“Steve Bannon has nothing to do with me or my presidency,” Trump said in a statement. “When he was fired, he not only lost his job, he lost his mind.”

The news of Bannon’s statements alone, however, as reported on Breitbart’s Big Government website, sparked a furious argument between readers in the comments, as they felt compelled to choose a side.

“I voted for Trump…” one reader wrote, “I didn’t vote for Bannon. I’ll stick with Trump, thanks.”

Another described Bannon as a “wart-covered rat jumping overboard.”

“Bannon is essentially right,” Tuinsma writes. “Meeting with agents of a foreign government and discussing how to subvert American elections is treasonous.

Within hours of publishing, the article boasted just under 11,000 comments, as readers clashed in long threads over the Trump-Bannon divorce. Meanwhile, figures in the media and government watched the right-wing spat unfold.

The president’s son, a prominent conservative leader, clearly sided with his dad, sharing his thoughts and retweeting others.

Andrew Breitbart would be ashamed of the division and lies Steve Bannon is spreading!

There is no side to choose. There is no dilemma here. @realDonaldTrump and @DonaldJTrumpJr are patriotic class acts who have the best interests of this nation at heart.

Nothing I despise more than jealous disloyalty.

Wow, Just looked at the comments section on Breitbart. Wow. When Bannon has lost Breitbart, he’s left with . . . umm, nothing.

It’s hard to not recall the former chief strategist’s eerie self-stated aim: the “deconstruction of the administrative state,” as first described in February last year. As such, some political analysts describe this feud as inevitable, pitching Bannon’s ideological purism against Trump’s embrace of corporate interests in passing recent tax laws.

But whether Trump can retain the extremely vocal populist and ideologically nationalist support base that Bannon drew to him through Breitbart remains to be seen. And whether Bannon can keep control of his audience after this is an open question.

Either way, 2018 got a lot more interesting.