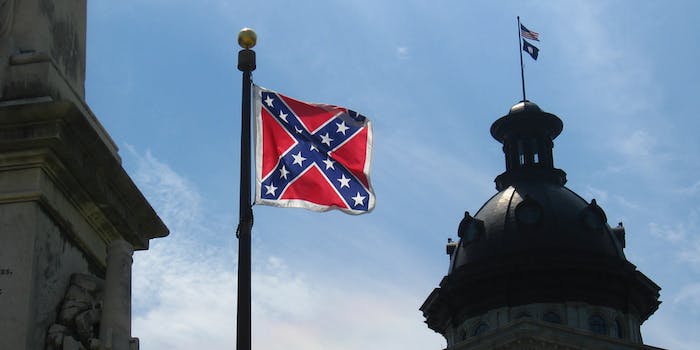 In the days since white supremacist terrorist Dylann Roof killed nine African-American church officials and parishioners at Emanuel African Methodist Episcopal Church in Charleston, South Carolina, the country has been embroiled in a fierce debate about the Confederate flag, technically the battle flag of the Army of Northern Virginia, which had been flying at the South Carolina statehouse for generations.

One activist who wanted the flag taken down decided to stop waiting for state lawmakers to act on the issue and did something about it herself. The Root reports that a woman identified as Bree Newsome was arrested on Saturday morning for scaling the flagpole at the South Carolina statehouse and taking down the flag. An accomplice, James Ian Tyson, was also arrested.

This beautiful woman scaled the flagpole at SC Capitol & ripped down the Confederate flag this morning #keepitdown pic.twitter.com/SU1TDjvhpg

NBC News reports that, if convicted, Newsome and Tyson face penalties up to a $5,000 fine and three years in prison. Within an hour, flag had been put back.

Friends of @BreeNewsome – I will pay her bail money or any legal fees she has. Please let her know this. #Charleston #TakeDownTheFlag

Seriously that is some superhero pose right there. #FreeBree pic.twitter.com/4rcZblWre8

The confederate flag beneath a black woman. This is symbolic. To me anyway. #FreeBree pic.twitter.com/aYuoSthBjR

Not just any woman. A fierce, courageous, strong as hell Black woman did what everyone knows must be done. #TakeDownTheFlag #FreeBree

A bio on Newsome’s website lists her as an activist, filmmaker, and musician who was arrested in 2012 during a sit-in at the North Carolina State Capitol protesting the state’s imposition of restrictions on voting rights.

The flag has flown at the South Carolina statehouse since the late 1960s, when, as Sidney Blumenhal argues in the Atlantic, it was put in a place as a statement of opposition to the civil rights movement.

The flag used to fly over the dome of the statehouse itself; however, in accordance with a bill passed by the state’s legislature in 2000, it was moved to another location on the capital grounds—where its place is protected by law. It was the only flag on the capitol grounds not flown at half-mast in the immediate aftermath of the Charleston shooting.

While Republican South Carolina Governor Nikki Haley has called for the flag to be removed, the 2000 law prohibits her from doing so unilaterally. In Alabama, on the other hand, Governor Robert Bentley was able to order the confederate flags taken down from the Alabama Confederate Memorial located on the grounds of that state’s capitol.