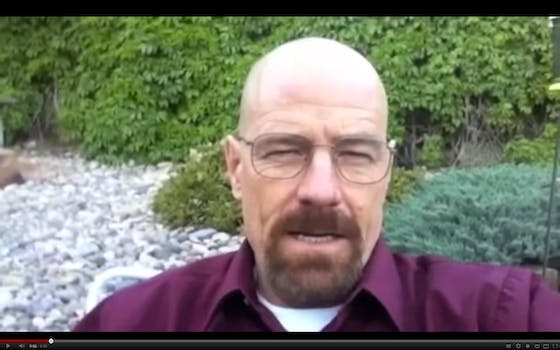 Walter White wants your vote, Crossroads high. And if you know what's good for you, you'll give it to him.

Anyone who watches Breaking Bad knows Walter White is one scary dude. When Brian Cranston’s pork-pie-hat-wearing sociopath isn’t cooking up batches of blue meth or throwing pizzas onto rooftops, White uses his powerful intellect to intimidate and manipulate others into doing his bidding—sometimes without their even knowing it.

So what better person to speak on behalf of a student body president candidate? Here’s White (with an assist from his right-hand associate Jesse “Bitch!” Pinkman, played by Aaron Paul) “strongly persuading” voters to elect Maxwell Ulin for student body president at Crossroads School for Arts and Sciences in Santa Monica, California.

Apparently, the ad is a response to a video made by Giancarlo Esposito (who plays White’s nemesis, Gus Fring) endorsing Summer Kennedy, Ulin’s rival candidate. According to Reddit user chucklease, that endorsement came in the form of a private Facebook video so it’s only accessible to members of her inner circle. Bad move, Summer. You don’t want people calling you an elitist right before the election.

Not quite. Crossroads is no ordinary school; according to a 2005 Vanity Fair feature, its alumni include Jack Black, and celebrities like Larry David and Mark Hamill have sent their children there.