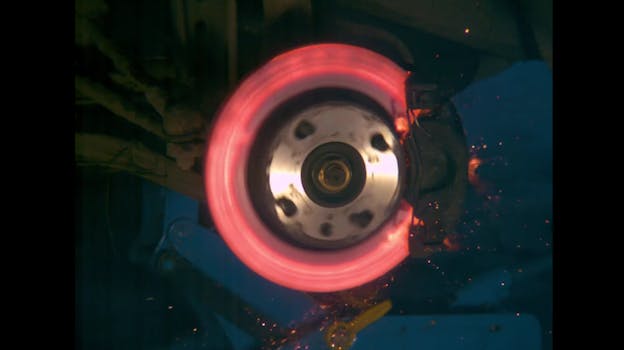 Screengrab via Beyond the press/YouTube

Watch a brake rotor explode violently when pushed past its limit

Tension, grind, and friction are some of the great, inescapable forces of human existence. Nobody and nothing escapes them, which is why all machines, structures, and bodies are doomed to fail someday. And sometimes, they can manifest themselves rather forcefully, giving a show of destructive power that’s simultaneously fearsome and awesome.

Case in point: this video of a brake rotor spectacularly failing under the very most strenuous of circumstances. It was posted by the YouTube channel “Beyond the press,” which is dedicated to behind-the-scenes videos of the construction of industrial presses, as well as the decidedly virtuous side-goal of showing “different creative ways to destroy stuff.”

And boy, did they come through on this one. As anyone who has a really old car and has heard a grinding, scraping noise when they hit the brakes knows, brake rotors are an absolutely essential part of an automobile. Failure to keep them properly maintained, in the most extreme of circumstances, can result in brake failure, leaving a driver completely helpless to slow the speed of the vehicle. There’s also one very simple, very predictable way to put an incredible amount of stress on them—gunning the gas while holding down the brake pedal.

So that’s what the folks at Beyond the press did, putting their well-worn 1990 Ford Fiesta through the ringer in the hopes of capturing the very instant the rotor explosively burst apart. It was, to put it mildly, a successful mission.

The rotor makes it about 50 seconds of being ridden hard before it violently explodes, but not before being warmed up to a visibly red-hot temperature. In the words of the driver: “Holy fucking shit!”

Luckily, they had a slow-motion camera trained on the rotor too, showing a close-up view that really captures the immense strain and sudden explosion. .

The remaining chunk of the rotor made it nearly 20 more rotations before it split and the whole thing blew apart.

It’s hard to decide which view is more impressive, the slow-mo tight shot or the wide angle one at full speed—so why not watch both? In summation, it’s hard to argue with the driver’s simple, enthusiastic and well-deserved takeaway: “Yeah, this went really well!”