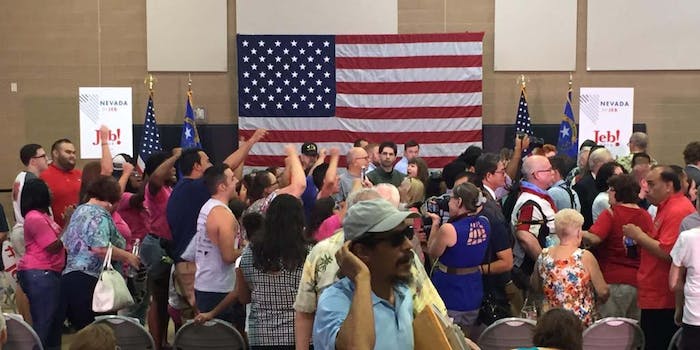 A group of #BlackLivesMatter protesters disrupted the end of a Jeb Bush town hall in Las Vegas on Wednesday night.

The protest followed similar disruptions by members of the movement at Bernie Sanders events and an attempted interruption at a Hillary Clinton event earlier this week. Bush himself had met with #BlackLivesMatter activists earlier on Wednesday to discuss criminal justice reform, according to his campaign.

The disruption began after a woman asked Bush about the treatment of minorities by the American criminal justice system.

“I wanted to ask you about racial injustice, racial inequalities, institutional racism,” activist A.J. Hall asked according to the Las Vegas Sun. “Are you going to be talking to different police departments about training reform? You talk about creating a better education system, but if kids in the neighborhoods are seeing their fathers and brothers and cousins killed, why would they want to go to school and excel?”

Bush responded by saying that police brutality is a “serious problem” that is getting worse and, more broadly, asserted racism undeniably still exists in the United States, according to the Los Angeles Times. Bush said the country’s leaders had the responsibility to better engage minority communities.

“A child that is educated, that believes that there are chances of going to college and living a life of purpose and meaning is important,” Bush continued. He then pointed to his education record as governor of Florida.

Unsatisfied with what they saw as a vague answer that didn’t nail down any specifics, protesters began chanting “black lives matter!” That was met with a smattering of chants like “white lives matter” and “all lives matter!”

For its part, the Bush campaign addressed the protest via statement: