8th grade you is psyched!

It was only a matter of time before technology finally caught up to our middle school love of mood rings. Finnish startup Moodmetric has developed a tool for tracking emotional responses based on electrical conductance of our skin—and packaged it in a fashionable piece of jewelry.

The Moodmetric smart ring was unveiled at the Slush conference in Finland this week and is expected to be available to the public by summer 2015.

Unlike the mood rings you might find in a claw machine at a local arcade, the Moodmetric ring doesn’t actually change colors to tell you your mood. Rather, the ring itself is made up of a biological sensor that tracks the skin’s “galvanic skin response,” or the way the body responds to psychological or physical arousal.

The ring then process the data, and by using a Bluetooth chip hidden in the ring’s “stone,” it sends the information to a smartphone app. The Moodmetric ring can’t interpret specific feelings like anger, heartbreak, or happiness, but it detects emotional levels and monitors how strong a reaction is, or whether a person is calm or relaxed.

Throughout the day, a person can check the app to monitor stress or relaxation levels, and compare to particular events which trigger a strong emotional reactions—the idea is that by tracking emotional stimulation, people can better manage stress and anxiety. 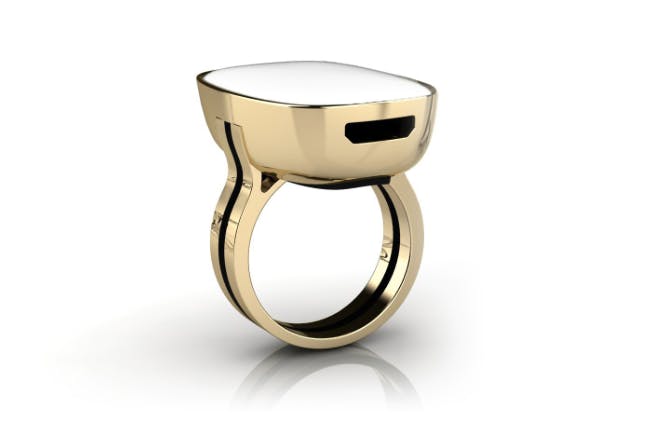 “The benefit for the user is especially in understanding better the emotionally loading moments of the day,” Niina Venho, COO of Moodmetric told me via email. “Equally it can be seen where are the most relaxing moments. These help in finding the balance in life by working on reducing the extra load and for instance adding calming moments to working day.”

The ring itself is made partly of steel, as it’s required to measure electrical responses. Venho said that the outer material will be fixed in the very near future, and while the jewel hides the electronics required to power the ring, the company can create tailored rings for individuals that include diamonds or other materials. Moodmetric worked with Finnish jewelry designer Vesa Nilsson to create the ring design.

The ring is charged using a microusb port, similar to other wearable devices.

Moodmetric might be the smallest and lightest device that tracks our biological response to emotions, but the concept itself isn’t new. Studies tracking electrical impulses in our skin go back as far as the late 1800s, when scientists researched how our skin conducts electricity.

Modern applications include mood bracelets and sweaters that change color when someone feels stimulated, and AutoEmotive, a project from students at MIT that monitors the physical responses of people in cars in order to make drivers safer on the road. There’s also the Olive smart bracelet has a similar stress management focus.