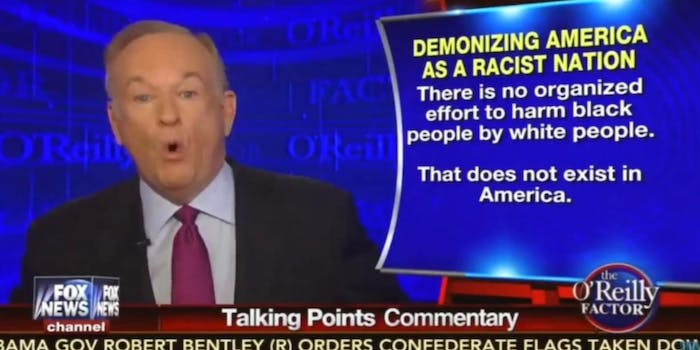 Fox News host Bill O’Reilly is fed up with people discussing racism in the wake of the Charleston church shooting.

On Wednesday night’s broadcast of The O’Reilly Factor, he denied that there was “an epidemic of racism” in the U.S. and suggested that liberal “race baiters” were making it up.

The self-proclaimed white supremacist who admitted to killing nine African-Americans in a historic black church in Charleston, South Carolina, last Wednesday said that his goal was to start a race war. But data be damned, O’Reilly believes that this was just a one-off incident and not in any way attributable to systemic racism.

A sidebar during his commentary read: “There is no organized effort to harm black people by white people. That does not exist in America.”

What’s worse, O’Reilly told viewers, “Some of us on this channel get viciously attacked for standing up for the truth.”

This shtick isn’t new for O’Reilly. Embattled patriotism is his bread and butter. But O’Reilly rarely escalates that indignation to DEFCON 1. He did just that on Wednesday night.

“Fox News is attacked when we report the truth?” he cried incredulously. “Well, you want a war? You got a war! I’m not going to sit here any longer and take this garbage!”

It soon became clear what this “war” would consist of: a conservative version of MSNBC loudmouth Keith Olbermann’s “worst person in the world” segments.

“People who lie, run the country down, who are racist themselves,” O’Reilly said, “They’re going to be called out right here on The Factor.”

H/T The Blaze | Screengrab via Mediaiter™/YouTube