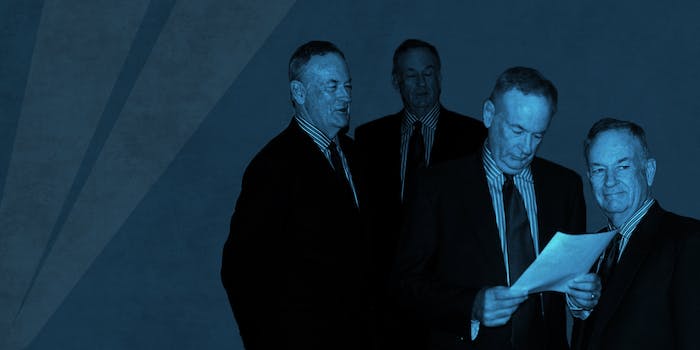 The longtime face of Fox News, ladies and gentlemen.

Isn’t it a little strange that Bill O’Reilly is suffering a scandal for lying?

The growing list of charges against him appear to be true, of course. But he’s been getting key facts wrong on air for decades, a trend his critics have closely tracked for much of his career. The falsehoods haven’t merely been tolerated by Fox News; O’Reilly has been elevated to the most iconic figure the network has ever produced—that he brings in $100 million in ads doesn’t hurt.

The scandal is strange not because he’s yet to be shamed off the air, but because he’s sinking into hot water for doing what he’s always done.

Coming so quickly after Brian Williams lost his NBC anchor job for his own falsehood about war-time experience, the timing for this new wave of scandals is pretty bad for O’Reilly. Blood in the water, new charges of lying haven’t been refuted so much as they’ve been met with more lies.

For a journalist, that’s a damning indictment.

But O’Reilly transcends mere journalism, as made evident by the fact that he hasn’t received the slightest slap on the wrist for this ongoing series of transgressions. He’s a commentator, an entertainer, and a world-class rage salesman who has a mile-long history of professional wrongs.

This isn’t a vague criticism; it’s provable by looking at objective fact and comparing it to O’Reilly’s words. In fact, outlets like Media Matters have made a full time job out of catching as many lies as they can.

Here, we report 99 falsehoods from Bill O’Reilly (not an exhaustive list). You decide what was a lie and what is merely a tendency to shout and repeat things when corrected. O’Reilly is a pro at both.

Correction: This story previously misidentified who said that former Mexican president Vicente Fox had used his nation’s army to traffic drugs across the border to the U.S. It was O’Reilly, not President Obama.<