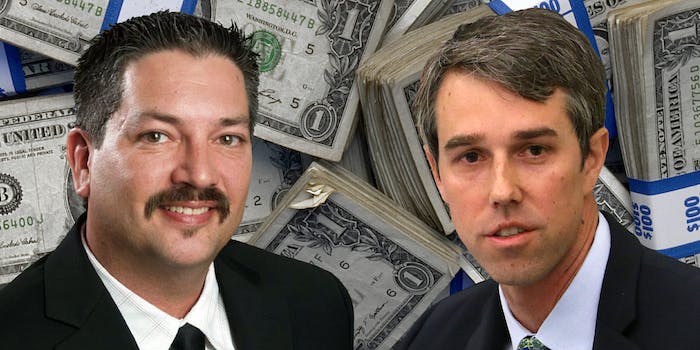 The messages are getting backed up by numbers.

As the old saying goes, words mean nothing if you can’t back them up. After more than a year of positioning their #resistance message, Democrats no longer have that problem. Across the country, liberal hopefuls are finding major fundraising success ahead of the 2018 midterms.

Two of the most successful fundraisers are also two of the most notable candidates in the country. Randy “Ironstache” Bryce pulled in over $2 million, while Beto O’Rourke raked in nearly $7 million.

These candidates are also representative of the dueling electoral approaches within the Democratic Party.

Bryce has electrified Democrats across the country with a Bernie Sanders-influenced platform and working class bonafides. It doesn’t hurt that he is running against Rep. Paul Ryan in Wisconsin’s 1st District and Ryan’s tax plan has become a symbol of cronyism and greed to many Americans.

It was reported this week that Bryce raised over $2 million dollars in the first quarter of 2018. His campaign claims 45,000 new donors, putting him close to the kind of small-dollar donations that Bernie Sanders was known for during his presidential primary bid. He has had success fundraising off of Paul Ryan’s missteps, including a now-deleted tweet in which Ryan clumsily defended a $1.50 paycheck increase for working people while his tax legislation offered millionaires massive returns.

Boasting massive union support and the endorsement of Sanders, Bryce is an example of the kind of progressive candidate emerging around the country. He supports Medicare for All, $15 dollar minimum wage, free college, and opposes fossil fuel pipelines. Bryce is also career union ironworker, a fact which has yielded some compelling campaign material.

BeO’Rourke is a charismatic and popular congressman currently representing Texas’s 16th district. While he is not as progressive on policy as Bryce (for example, he doesn’t explicitly support single payer), the Democratic Party sees him as the kind of politician who can take down the widely loathed Sen. Ted Cruz.

O’Rourke’s Senate bid has taken in $6.7 million in Q1, a number that the Texas Tribune calls “staggering.” Like Bryce, there is a big percentage of small-dollar donations in that number; the average donation to O’Rourke averages about $47.

On the issues, O’Rourke is more of a mixed bag. A recent profile compared him to failed Georgia congressional candidate Jon Ossoff. As he’s declined to explicitly support Medicare All, Black Lives Matter, or Fight for 15, that doesn’t sound far off. However, O’Rourke isn’t your boilerplate establishment Democrat, as he favors ending the War on Drugs through decriminalization and is left of many in his party on immigration. Like many progressives, getting money out of politics is also central to his campaign.

Bryce and O’Rourke clearly benefit from the fact that they are taking on high-profile and widely-despised candidates. Also, Bryce’s career as an ironworker and O’Rourke’s past playing in a band with a member of Mars Volta make for compelling stories that can act as a magnet for out of state money.

But, so far, it looks like rising tides are lifting all boats. The DLCC (Democratic Legislative Campaign Committee) announced a record first quarter themselves, raising $5 million. This means candidates with more traditional stories or less splashy contests are seeing at least some financial benefits.

There are a number of other fundraising success stories out there, but, again, the most notable ones tend to be in against high-profile Republicans and embattled incumbents. Controversial House Intelligence Committee chair Devin Nunes (R-Calif) saw his opponent for his Fresno congressional seat, Andrew Janz, raise $1 million in Q1. Progressive insurgent New York gubernatorial candidate Cynthia Nixon took in thousands of small donations in just one day last month as she launched her campaign against notoriously Republican-friendly incumbent and enemy of the subways Andrew Cuomo.

With months to go before the midterms and President Trump’s approval ratings creeping upward, the fundraising hauls for Democrats will not just have to continue, but will have to keeping spreading to more than just a handful of particularly attractive candidates. Democrats need to gain 24 seats in the House to take back control of the chamber, and while they are only two seats away from a Senate majority, 26 of the 34 seats in play are already held by Democrats.

If only headline-grabbing candidates grow their war chests, it is likely that the Democrats could come up short come November.

It remains to be seen whether these emerging all-stars of the party will be a shot in the arm or a net distraction for other congressional battles, but regardless of what the future holds, the Democrats are off to a good start. In a party with few leaders following the departure of President Obama from the White House, the making of a few liberal political stars can’t be a bad thing. In a post-Citizens United world, money, almost literally, talks.