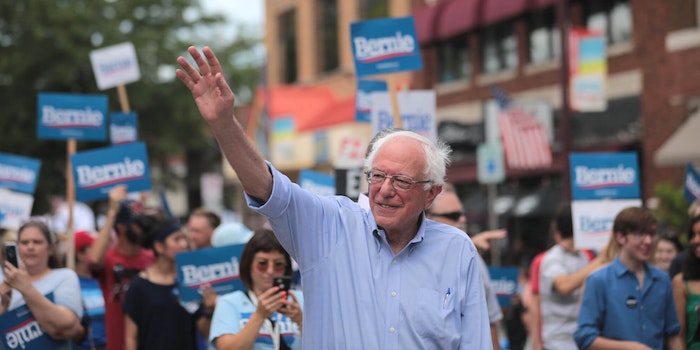 The win in New Hampshire comes on the heels of a strong showing in Iowa.

Sen. Bernie Sanders (I-Vt.) has won the New Hampshire primary, according to NBC, ABC, and CNN.

The win for Sanders in the nation’s first primary comes after a strong showing in the Iowa caucuses–results that weren’t known for days amid technical problems with an app used by the Iowa Democratic Party.

Sanders defeated Hillary Clinton in New Hampshire during the run-up to the 2016 election.

Polls on Monday showed Sanders with 28.7% support, compared to 21.3% for Buttigieg, 11.7% for Klobuchar, and 11% for both Warren and Biden, according to Real Clear Politics, which takes an average of several polls.

“I believe we are going to win,” Sanders said, addressing supporters in Manchester, New Hampshire. “We have an unprecedented grassroots movement from coast to coast.”

Tuesday night’s win comes on the heels of a razor-thin showing against Buttigieg in Iowa. With 100% of precincts reporting, Buttigieg had secured 26.2% of the states delegates, with Sanders netting 26.1% of them.

With Iowa and New Hampshire over, the win on Tuesday night could give Sanders momentum heading into the Nevada caucuses–a state where he could use a bump, according to polls.

Real Clear Politics shows Biden in the lead with 21% support in Nevada, followed by Sanders with 17.5% and Warren at 11.5%.