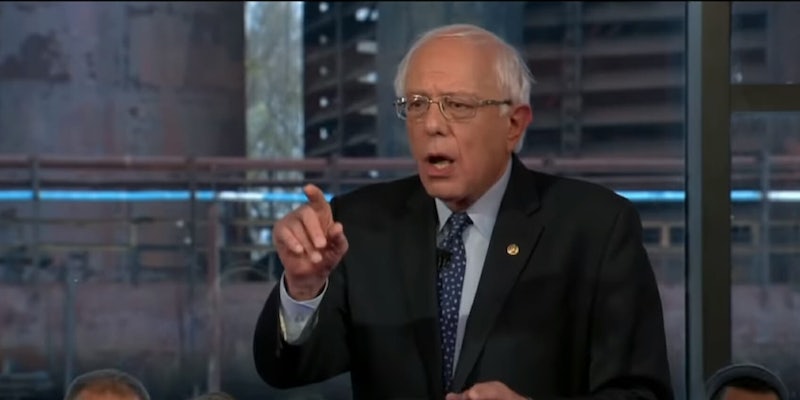 The question from a Fox News host was met with lots of cheers.

The audience at a Fox News town hall with 2020 Democratic presidential hopeful Sen. Bernie Sanders (I-Vt.) erupted in applause on Monday night when asked whether or not they supported a “Medicare-for-All” healthcare option.

The cheers came as Fox News host Brett Baier asked the audience—who he said had a mix of conservatives and liberals in attendance—how many of them had private insurance.

A large amount of the audience raised their hands.

Baier then asked how many would be “willing to transition to what the senator says, a government-run system?”

The crowd erupted in cheers following the question from the host.

Raise your hand if you're sick and tired of your private health insurance company. We need Medicare for All. #BernieTownHall pic.twitter.com/3euHRCjqn9

“Millions of people every single year lose their health insurance. You know why? They get fired, or they quit, and they go to another employer,” Sanders said, adding: “Every year millions of workers wake up in the morning and their employer has changed the insurance that they had. Maybe they like the doctor they had… so this is not new. Every year. What we’re talking about, actually, is stability. That when you have Medicare for All, it is there now and will be there in the future.”

Last week Sanders reintroduced his “Medicare for All” bill in the Senate, a notion that many other 2020 Democrats have supported.