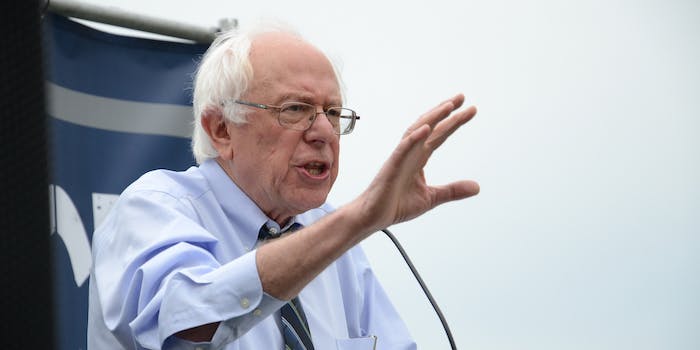 It wouldn't be a Bernie Sanders interview without a little Internet griping, right?

Sen. Bernie Sanders (I-Vt.) is the most famous curmudgeon in the U.S. Congress and possibly in the entire American political system. So when the 2016 presidential candidate started talking about media coverage of elections, it was only a matter of time before he focused his ire on those newfangled Internet platforms.

“There is more coverage about the political gossip of the campaign, about raising money, about polling, about somebody saying something dumb, or some kid works for a campaign and sends out something stupid on Facebook, right?” Sanders said Sunday on CNN‘s media-analysis show Reliable Sources.

Sanders’ belief that campaign journalism should be something other than tweet-driven gossip fits right in with his old-fashioned political persona. Even so, he is an enormously popular figure on social media. Time magazine named his Twitter feed one of their favorites of 2014. And just last week, the New York Times called him “Facebook royalty.”

“Mr. Sanders’s prominence online is all the more improbable given that he does not do many things the way social media experts say they should be done,” the Times story read.

In an interview for the story, Sanders took pains to distinguish his online presence from the typical celebrity-politician social-media drivel.

“I know that people talk about their cats and ‘I’m walking to the grocery store and getting a can of chicken soup’ and ‘this is so exciting,'” he told the Times. “By and large, we have not done that.”