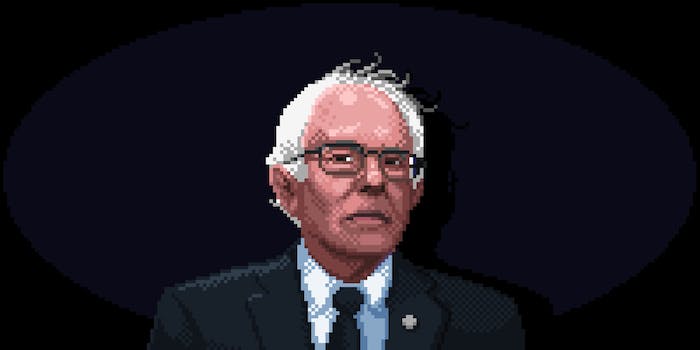 Despite calling for Wasserman-Schultz's resignation, Sanders stands by Clinton.

Vermont senator and Democratic presidential runner-up Bernie Sanders formally addressed the thousands and thousands of leaked emails from the DNC that were released by Wikileaks on Friday—specifically, the ones about him.

Sanders made an appearance on ABC’s This Week on Sunday morning, discussing the leak with George Stephanopoulos.

The quality of information contained within the dump has varied from entertaining, to controversial, to downright inflammatory, especially what some of the emails suggest about the committee’s bias in favor of the candidacy of former Secretary of State Hillary Clinton.

Notably, one DNC staffer floated the idea of undermining Sanders by painting him as an atheist, while DNC chair Debbie Wasserman-Schultz called his efforts to insert pro-Palestinian rights language into the party platform as “disturbing.”

Needless to say, Sanders is not happy about any of this, and he’s in a difficult situation, having to respond to the inflammatory emails in the immediate run-up to the Democratic National Convention on Monday, when he’d been expected to give a speech in support of the Clinton/Kaine ticket.

Regardless of whether he ends up speaking to these new divisions in his speech, Sanders did come out swinging somewhat with Stephanopoulos. He said that he wanted Wasserman-Schultz to resign from her position as DNC chair. Here’s what he offered when Stephanopoulos asked him, right at the top of the show, for his reaction to the leaked DNC emails:

“I told you a long time ago that the DNC was not running a fair operation, that they were supporting Secretary Clinton, so what I suggested to be true six months ago turned out to be true. I’m not shocked, but I am disappointed, and that’s just the way it is.”

Stephanopoulos then asked Sanders what he thought should be done as a result, and that’s when Sanders unloaded on Wasserman-Schultz:

“Well, what I also said many months ago is, for a variety of reasons Debbie Wasserman-Schultz should not be chair of the DNC. And I think these emails reiterate that reason why she should not be chair. But the main reason to my mind is not only these emails; the main reason is we need a Democratic Party that is open, that is bringing working people into the party, that is bringing young people, that is bringing all the people in this country who are sick and tired of an economy that works well for the one percent while the middle class continues to decline.”

When asked if Wasserman-Schultz should step down as honorary chair of the Democratic convention and be removed from her prime-time speaking slot, Sanders was explicit.

“I think she should resign, period, and I think we need a new chair who is going to lead us in a very different direction,” Sanders said. “That is, taking on the billionaire class and fighting for an agenda that works for working families.”

Sanders was right when he said he’d challenged Wasserman-Schultz’s status as DNC chair before. Amid criticisms about his lack of fundraising for the party, he donated $250,000 to her primary opponent in May, and publicly stated that he hoped she would not be reelected. In other words, this is a situation with some longstanding bad blood, and the leaked emails will probably only serve to intensify that disdain.

While Wasserman-Schultz has not resigned, she has indeed been stripped of her speaking slot at the convention next week, and will not preside over the convention as party chairs typically do, amid concerns that her very presence is now too inflammatory to give her a prominent role.

It’s worth noting that Sanders rebuked Dr. Jill Stein’s offer to join him in the Green Party instead of continuing his support of the Democrats. If not for the very real consequences of a Donald Trump presidency, Sanders continues to back Clinton as the only candidate willing to work with him to perpetuate his revolution.

“Right now we have got to defeat Trump, we have to elect Hillary Clinton. We have to elect progressive candidates in the house, and in the senate, and school boards, and city councils,” Sanders explains. “And most importantly, we have got to continue the fight for an agenda to create a government that works for all of us, and not just the people on top. And that’s the mission that I will be undertaking.”

Former New York Mayor Michael Bloomberg is expected to similarly come out in favor of Clinton, owing to his disdain for the Donald. Bloomberg, who has been a registered Republican for over a decade and a half, was considering running for president himself. He now seeks to stop what his party has allowed in complicity. The surprising news stands out as perhaps the one good thing Democrats can hear going into their quadrennial convention in Philadelphia.