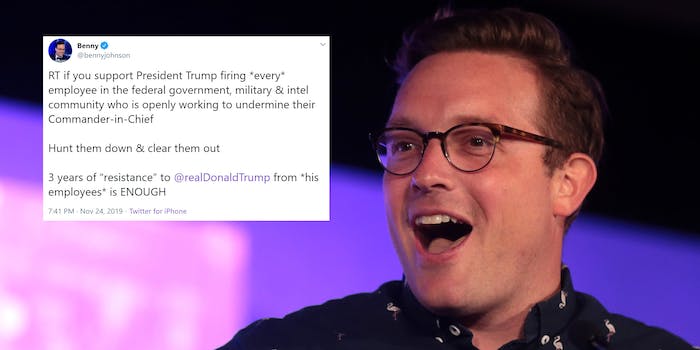 The right-wing blog's most prominent talking head makes a baffling call to action.

This weekend brought the very confusing story of President Donald Trump’s decision to personally intervene in the case of U.S. Navy SEAL Eddie Gallagher, who was acquitted of war crimes in a recent military tribunal.

Now, Secretary of the Navy Richard Spencer is out, having either resigned or been forced out after he either went behind Defense Secretary Mark Esper’s back to work on a deal for Gallagher to remain a SEAL or because he upset the president by publically disagreeing with him. Adding to the confusion, in his resignation letter, Spencer seemed to hit at the president, saying he could not “obey an order that I believe violates the sacred oath I took.”

It’s a messy situation that delves into the code of the military, as well as the secrecy of special operation units, but one man brazenly concluded that resigning rather than working for the president meant it was time for one thing: An ideological purge of the entire government.

RT if you support President Trump firing *every* employee in the federal government, military & intel community who is openly working to undermine their Commander-in-Chief

Hunt them down & clear them out

3 years of “resistance” to @realDonaldTrump from *his employees* is ENOUGH

Turning Point USA meme specialist and noted plagiarist Benny Johnson is calling for the president to fire every government employee who doesn’t support Trump, which is, despite the right-wing blog’s ostensible obsession with personal liberty… pretty much the way a fascist government works.

“RT if you support President Trump firing *every* employee in the federal government, military & intel community who is openly working to undermine their Commander-in-Chief. Hunt them down & clear them out,” he tweeted Sunday evening.

It’s so fundamentally un-American that despite Johnson’s propensity for flabbergastingly stilted tweets and memes, this blew people on Twitter away.

RT if you recognize that this is: a) illegal; and b) insane. https://t.co/j2lxMsZrob

“Hunt down” government employees based on their political affiliation.

Federal employees do not work for Donald Trump. They work for the American people.

The fact that you don't get this speaks volumes about you. https://t.co/SaZ9hZcDEN

As many pointed out, in addition to this bizarre call for ideological purity, the government doesn’t really work this way.