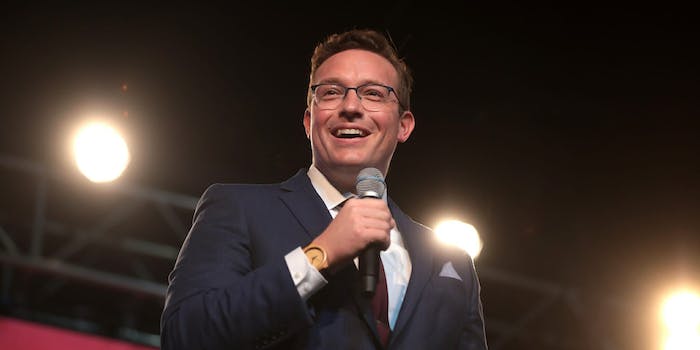 'From plagiarism to Pampers.'

The 32-year-old will serve as chief creative officer for the nonprofit set up by right-wing activist Charlie Kirk. The group is known for championing right-wing ideas and having its volunteers dress as babies to protest Safe Spaces at Kent State University.

I’m thrilled to be entering a new professional chapter in an executive capacity as the CCO of Turning Point USA.

I’ve been a speaker & emcee of dozens of @TPUSA events. It’s where the energy is.

There are some really exciting things to come.

“Benny is bringing his humor, wit, and creative force of nature to Turning Point USA,” Kirk told the Hill. “It’s a natural partnership and we could not be more thrilled.”

Johnson doesn’t quite have a reputation for originality and creativity, however.

The conservative first gained notoriety after being fired in 2014 from BuzzFeed when dozens of incidences of plagiarism were discovered in his work. From there, Johnson moved across several conservative blogs, running into trouble again for plagiarism and dodgy reporting that pushed conspiracy theories.

Despite the odds, though, Johnson successfully managed to reposition himself as an online personality, trolling liberals and creating viral content for conservative outlet the Daily Caller.

News of Johnson’s move to Turning Point USA came in the same week that right-wing outlet Big League Politics called him out for more plagiarism, causing many to suspect that he would befall another dismissal. An internal Daily Caller memo on the reporter’s departure leaked Tuesday.

But rather than being dropped—again—Johnson was apparently lining up his new gig at Turning Point USA.

The news was welcomed sincerely by conservatives on Twitter.

But also by liberals, who just couldn’t resist the diaper jokes.

one step closer to benny johnson diaped up

From plagiarism to Pampers https://t.co/pSwDNBYNmX

The Daily Dot has reached out to Charlie Kirk for comment.