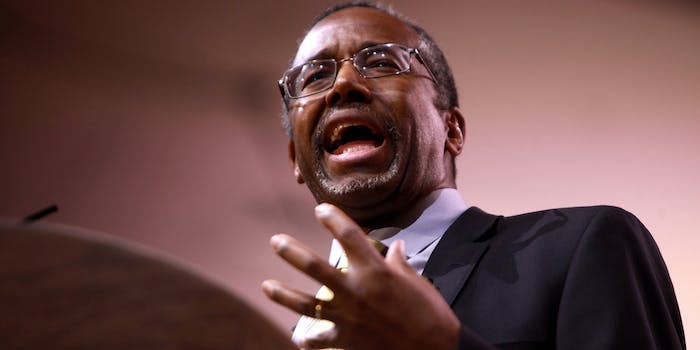 Carson has a $10 million warchest already.

The newest player in the 2016 presidential campaign just entered from stage right. And he’s no fan of government surveillance.

Ben Carson, a conservative activist and former Johns Hopkins neurosurgeon, says there is a very strong chance he will be running for America’s highest office by this time next year. The announcement has been met with rabid enthusiasm as it’s been shared nearly 40,000 times on Facebook alone since this morning.

A native of Detroit, Mich., Carson had a distinguished medical career in Baltimore’s Johns Hopkins Hospital until last year when he began writing a conservative weekly opinion column in The Washington Times. He’s also been a regular contributor to Fox News.

The potential run is backed by $10 million in PAC money. It’s motivated, among other issues, by an opposition to “Big Government intervention” in the lives of Americans, Carson indicated on Monday on “The Hugh Hewitt Show.”

We’re going to reduce the government by attrition. Thousands of people are going to retire each year. We’re not going to replace them. And in four to five years, the government would be down to the size that it needs to be. We will begin to look at how we can use our technology to become an informed populace again, the way we can use virtual classrooms and things of that nature. I would get the NASA program off the ground because enormous numbers of inventions came out of NASA, things that we use every day. And you know we need to bring the innovative spirit back to America.

Carson is a conservative Christian who recently won an Iowa straw poll at the Polk Country Republican Party Dinner in the highly contested state over major competition, such as Republican favorite Sen. Ted Cruz (R-Texas). In fact, the potential candidate is on a big upswing. Earlier this year, he finished third at the Conservative Political Action Committee’s straw poll behind Sens. Rand Paul (R-K.Y.) and Ted Cruz.

Carson has well-defined right-wing positions on a few standard issues—he’s against gay marriage, for affirmative action, doesn’t believe in evolution, and said ObamaCare is worse than slavery. He also refused to call Edward Snowden either a hero or traitor when his leak of National Security Agency (NSA) documents hit the public last June.

“It is absolutely important that we know what’s being done and what’s being monitored,” he said on Fox News last year. “The secrecy that’s going on right now, coupled with the apparent dishonesty in government, has obviously dampened the enthusiasm for people about the veracity of their government.”

This year, Carson compared the U.S. to something a bit more extreme, saying the country was “very much like Nazi Germany” and that we lived in a “Gestapo age.”

“And I know you’re not supposed to say ‘Nazi Germany,’ but I don’t care about political correctness,” he told Breitbart News. “You know, you had a government using its tools to intimidate the population. We now live in a society where people are afraid to say what they actually believe.”