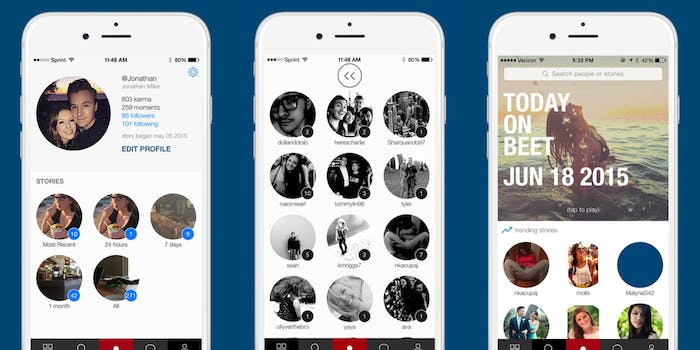 It's not Snapchat—and that's a good thing.

At first glance, social video app Beet, created by Sean Thielen and Jonathan Miller while they were still attending university, looks like Snapchat. It lets users take quick videos that they can share with their friends in the form of “stories,” a montage of all the footage taken throughout the day.

However, Beet comes onto the social video app scene with a much different goal–that is, to save these moments in a photo album-like collection (many of its users are new parents compiling videos of their children). Thielen and Miller describe how Beet users aren’t exactly after amassing a huge following, but about capturing meaningful footage for themselves. They took the time to tell us a bit about their vision and how they set out to fill an empty social video niche, one that isn’t focused on gaining fans.

What is the main idea behind Beet—what’s the point of the app? How are people meant to use it?

Sean Thielen: The idea behind Beet is to offer a more genuine and authentic view of someone’s life. We noticed that there is a lot of disconnect between who people are in real life and the personalities they present on social media. It’s hard to portray a real picture of yourself on social media, just because the nature of those platforms encourages people to pick and choose only those moments that will get the most likes, and we often miss out on sharing the things that matter the most.

So we made Beet to minimize the distance between our real selves and our social personalities. By compiling all of these candid clips into an ongoing video montage, Beet shifts the focus away from just individual moments and instead shows your journey.

Each video platform has its own video time limit. Why choose six seconds? Anything to do with thinking that it works well on Vine?

Jonathan Miller: Yeah, we definitely like how well the six second limit works for Vine. The way we’ve appropriated that thinking into Beet is that the six second “moment” occupies a kind of liminal space between photo and video–it’s more engaging and more valuable than a photo, but it’s less intense than watching a full video. In the montage format when you’re playing someone’s story, it keeps things moving and interesting without being overwhelming.

Read the full story on VideoInk.