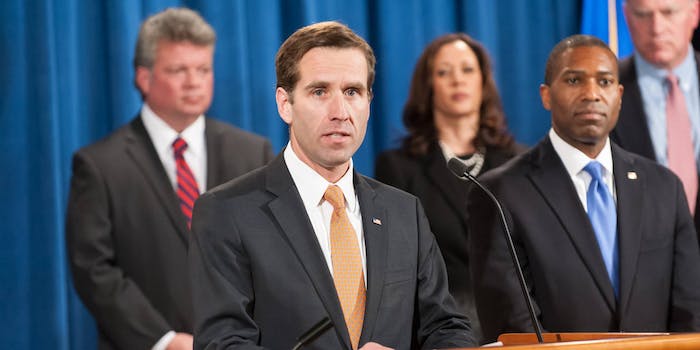 The family announced the news on Saturday night.

Biden, known popularly as Beau, was the former attorney general of Delaware and was preparing for a campaign to be the state’s governor in 2016.

“It is with broken hearts that Hallie, Hunter, Ashley, Jill and I announce the passing of our husband, brother and son, Beau, after he battled brain cancer with the same integrity, courage and strength he demonstrated every day of his life,” the vice president said in a statement to the media. “In the words of the Biden family: Beau Biden was, quite simply, the finest man any of us have ever known.”

The White House has opened up the ability to leave messages for the VP and Biden family in this time of grief. http://t.co/ZpIgRhFYrP

The vice president lost his first wife and their 13-month-old daughter in a 1972 car crash.

Beau suffered a mild stroke in 2010. In 2013, he spent time in a hospital after “an episode of disorientation and weakness.”

Beau Biden and his father, the vice president, at the 2008 Democratic National Convention http://t.co/G0CdG4xBuX pic.twitter.com/UHN0f0tKG0

From the entire Cheney family – our deepest sympathy and heartfelt prayers to the @VP Biden family.

My heart is broken for the family of Beau Biden—a wonderful man who served his country with devotion and lived his life with courage. -H