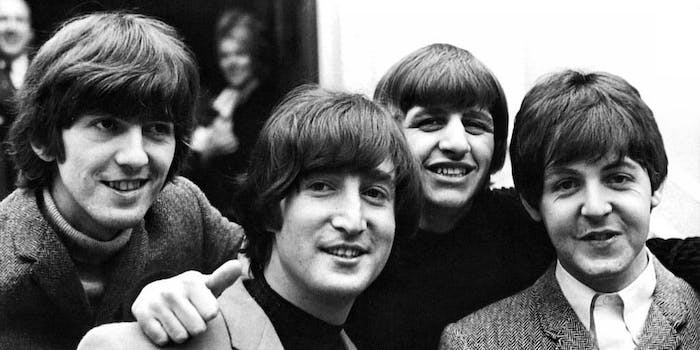 Google Street View blurs all of the Beatles’ faces—except one

Is this a hint about the real Starr of the band?

Since their explosion into pop culture in the 1960s, the Beatles have been no strangers to controversy and rumor. For example, many credit John Lennon’s demanding wife Yoko Ono for the band’s eventual split. In addition, rumors of Paul McCartney’s death ran rampant for a while, with conspiracy theorists claiming that playing certain Beatles songs backwards would provide clues about McCartney’s demise.

Josh Weinstein, who has also written for shows like Futurama and Gravity Falls, noticed that, in many public posters of the band that appear on Google Street View, only three of the four band members’ faces are blurred out.

After noticing this, Weinstein did what any of us would do in this scenario: He shared his findings with his over 7,000 Twitter followers.

Google Street Executive: "Blur all the Beatles' faces but Ringo's. No one must ever know who else was in the band." pic.twitter.com/TIjlMGdKfk

Other Beatles fans on Twitter reacted to Weinstein’s unique discovery.

@Joshstrangehill Beatles tribute bands are not immune either. Outside the Cavern Club: pic.twitter.com/AuCzM3oMXk

The blurring is not consistent. In several of the examples, the one face left unblurred is Ringo Starr. But the other three Beatles get their moments to shine in other Street View images.

Neither of the Beatles’ two surviving members, Paul McCartney and Ringo Starr, have publicly commented on the images.

Could this all be a coincidence? Or is there something weird happening between Google and the Beatles?

We may never know, but these images are funny and mysterious either way.