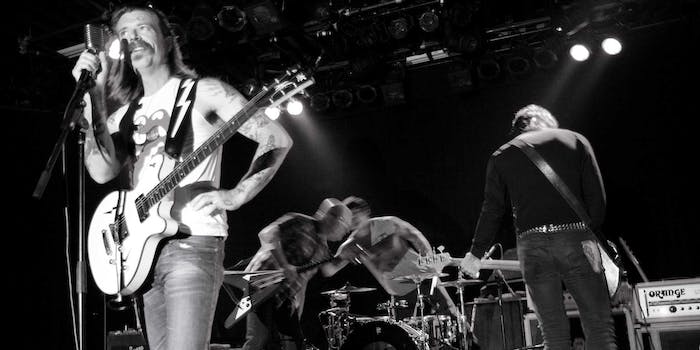 Some Eagles of Death Metal fans had their cameras on when the attack began.

Warning: The videos in this article may be upsetting to some viewers.

Following the series of attacks in Paris on Friday night, videos are beginning to surface from the Eagles of Death Metal concert where 89 people were killed.

The Bataclan became a scene of chaos after attackers opened fire on the crowd, taking approximately 100 hostages. The band’s merchandise manager, Nick Alexander, was one of those killed before French police stormed the Bataclan and freed the remaining hostages.

Many audience members were filming or using social media at the time of the attack. One man, Benjamin Cazenoves, became a worldwide source for updates from within the concert hall, posting Facebook updates as the night progressed. Videos from the concert captured the moment when the attackers opened fire, showing the band reacting with confusion before realizing what was happening.

Graphic designer Seb Snow posted this clip from the concert, with the caption, “The last notes before the gunfire, panic and horror.”

Les dernières notes, avant les coups de feu, la panique et l'horreur… @eodmofficial #parislanuit #concert #horeur @lebataclan #lebataclan #attentat #peaceforparis /// 16-11-2015 : Hello, I want to thank each one of you for your expressions of support. I was lucky to get out unscathed. All my thoughts goes to the victims and their families. Peace.