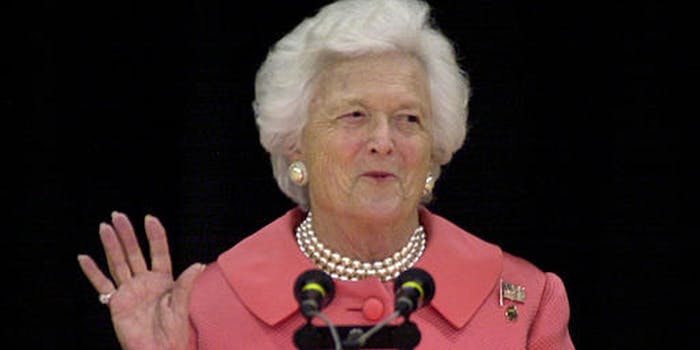 “Kennedys, Clintons, Bushes, there are just more families than that.”

Do you think there is room for another Bush in the White House? Talk about a depends-on-whom-you-ask question. C-SPAN put it to none other than former first lady Barbara Bush herself, referring to a possible 2016 run by her son and George W.’s brother, Jeb Bush.

Her answer should be printed on the back of every ballot in America.

Here is the video of her response.

TRANSCRIPT: “I think this is a great country. If we can’t find more than two or three familes to run for high office, that’s silly. There are great governors, great eligible people. I think, Kennedys, Clintons, Bushes, there are just more families than that. I’m not arrogant enough to think that we alone are raising [candidates]. We are raising public servants … and there are a lot of ways to serve. Being president isn’t the only one. I would hope that someone else would run.”

The former first lady added that while she thought her son would be the best candidate for president (she’s his mom!), she hopes he won’t seek office “because I think he’ll get all my enemies, all his brother’s.” (Again, she’s his mom!)