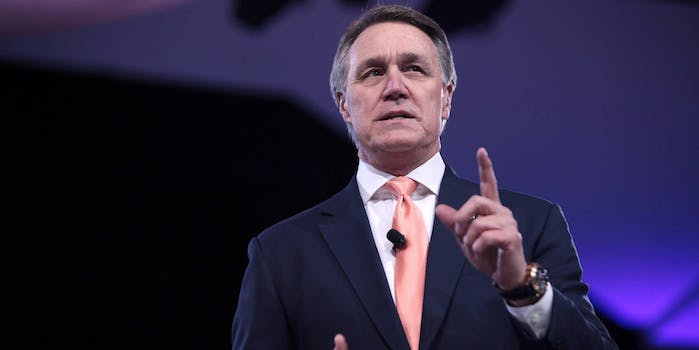 His office denied that he intended his comment as a threat.

Georgia Sen. David Perdue told a crowd at a religious event that they should pray for President Barack Obama’s imminent demise.

“We should pray like Psalm 109:8 says: Let his days be few,” the freshman senator said at the Faith and Freedom Coalition’s Road to Majority conference.

Psalm 109 is one of the most vindictive passages in the Bible, and its eighth line is widely understood to be a curse of death. Other parts of the psalm include “Let his children be fatherless, and his wife a widow” and “Let there be none to extend mercy unto him: neither let there be any to favor his fatherless children.”

Conservatives often referenced the psalm after President Obama’s election. At the time, the political context—Obama was in his first term—was vague enough that it could have been meant as a wish for his defeat in 2012.

A Perdue spokeswoman denied that the senator had been calling for Obama’s death.

“The Senator said we should pray for President Obama,” Caroline Vanvick, Perdue’s press secretary, said in an email, “and then said jokingly that we should also pray, like in Psalm 109:8, ‘Let his days be few, and let another person take his office.’”

Given that Obama cannot run for a third term, there would seem to be no need to pray for someone else to replace him soon.

Threatening the life of the president is a felony punishable by a fine of up to $250,000 and five years in prison. The Secret Service did not respond to a request for comment on Perdue’s remark.

Vanvick emphasized that “Senator Perdue in no way said this out of malice and does not wish any harm on our President.”

Perdue won his seat in the 2014 midterm election, replacing longtime Georgia lawmaker Saxby Chambliss. Before joining Congress, he was the CEO of Dollar General, a consultant at an Indian textile company, and the co-founder of the global trading company Perdue Partners.