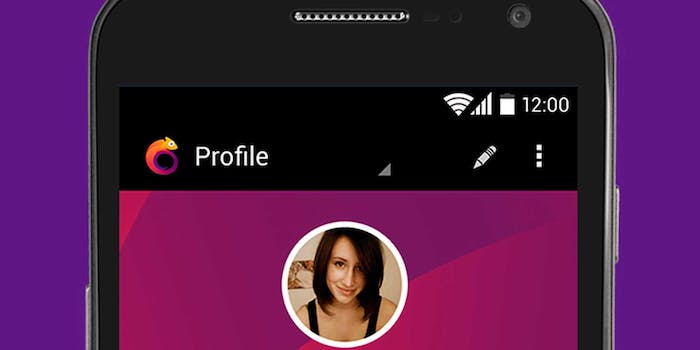 Remember chat rooms? This app wants to resurrect them. But only the good parts.

In an App Store—nay, a world—brimming with digital communication options, it’s hard to know if anything’s missing.

There’s Facebook Messenger for quick chatting with close friends and family, and Google Hangouts for on-the-go (or at your desk) conversations or even video calls. WhatsApp, as we’ve all recently learned, is the $19 billion SMS replacement app that will eliminate our need for anything else. Hipchat and IMO are great for work-related or productivity discussions, and there are more Snapchat-ish novelties than an Old like me can name.

So that should cover it, right? Wrong, says Banter CEO and cofounder Andrew Busey. Banter, launched this week, is yet another messaging app trying to carve out a niche in an incredibly crowded market. But what distinguishes Banter from this crowd is that instead of trying to push us into uncharted chatting territory, it’s instead trying to resurrect a part of the genre that’s been somewhat left behind: the chat room.

“We want to bring more classical chat back to the forefront,” Busey says. “To make it accessible and engaging on mobile.”

Busey, who has a diverse background as an entrepreneur and sold his last company, Challenge Games to Zynga (he remarks that “obviously Zynga has changed a lot since [the acquisition]”), is fully aware of the busy pool he and Banter are jumping into—and he thinks his product’s relatively retro hook is what will capture an audience.

“You have messaging apps like Facebook Messenger and WhatsApp; those are basically SMS or SMS with a twist. Those are great for people you already know. Then there are what I sort of call the ‘confessional apps,’ like Whisper. Those are … a generalized Hot or Not: You put something witty or sad or tantalizing out there and people discuss it or give it a thumbs up or a thumbs down. But there’s not actually a lot of discussion there.

“With Banter, you can have actual conversations with anyone as opposed to having to maintain a strictly-styled conversation.”

The chat room has resisted major change over the years—the phrase alone triggers middle school memories for me. Does anyone else remember illicitly sneaking into computer dens at 2am to log on and watch, perhaps maybe even type, into those largely foul things? Or maybe ventured into them at sleepovers? There’s long been something “uncivilized” about chat rooms, as well as an air of dissession and volatility. You’re giving your eyeballs over to completely strangers, with very little structure to guide the conversation. Who knows what they’ll say!? 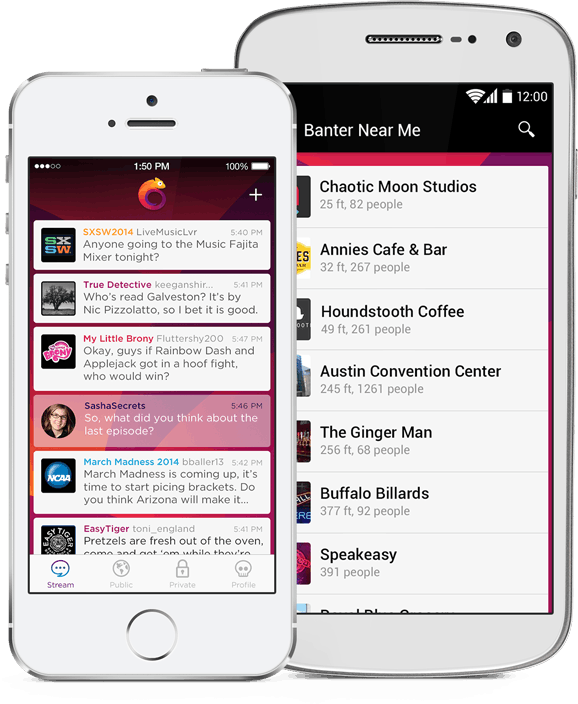 Despite any misgivings, they were a hallmark of Internet 2.0, and they were never fully reintegrated into the New Web (or the mobile one).

“You look back at AOL and Compuserve almost 20 years ago, and chat rooms made up about 80 percent of their activity,” says Busey. “IRC is a little difficult for people to get into now. The last place where chat rooms still really exist is in massive multiplayer online games. “If you look at those types of things, that’s what we’re trying to achieve, but to make it easier and better.”

And what about that volatility—outright hostility might be a better word. Nary a chat room is without its trolls, but our Internet is one increasingly punishing of their kind. How does Banter plan to bring us chat rooms without their average clientele?

“It’s the Internet. You can’t do anything without some jerk showing up. But we try to minimize it,” he says. Like generally all apps that allow you to see content or talk with strangers, there are flagging and reporting features, as well as Banter’s own mods and monitors, to call out these detractors. Busey says that in two taps you can block someone.

The other element Banter is trying to fix is room flow. Too few people and a conversation stagnates; too many and it’s overwhelming. And this ratio changes by subject matter; it’s something the team has spent ample time on in the beta phase trying to pinpoint and understand.

“We really want to learn what makes a room too crowded or not full enough. We know it’s number of people but it’s also velocity… it depends on the topic and how people are talking about it. It’s hard to test. 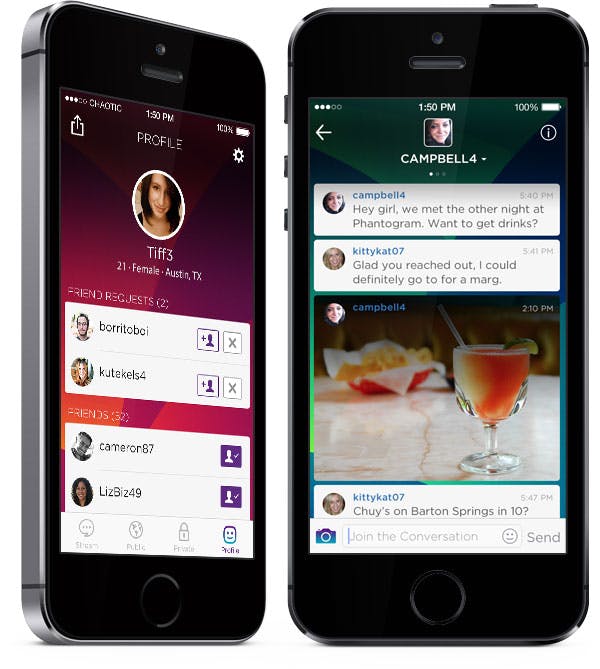 “We have some ideas about this now though: [For instance] sports can have a higher velocity. It really depends on degress of nicheness. LIke you start with a chat room for ‘health,’ and then it whittles down to a chat room for ‘support groups.’ Then you have ‘cancer support groups.” Over time as people select the more granular rooms, the conversations happen between fewer people and are more personal.”

He returns to his example of the sports chat room, saying these conversations can happen between more people and at a faster rate, but as humans we process information that’s not as personal more quickly.

If a room ends up being too crowded, Banter mods try to prompt users to visit the more granular rooms. If a certain group of people in the sports chat room are talking about a specific game, they will see a notification asking if they’d like to join a room dedicated to that game. Right now, Banter is mobile-only. Since this was the platform the team considered truly missing what it offers, it was the launch priority. But desktop capability will be available in the future.