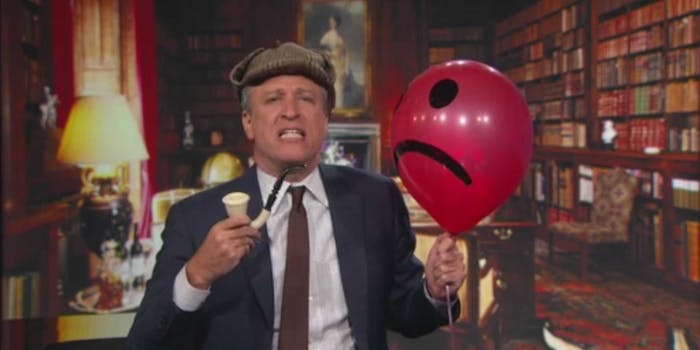 Leave it to Jon Stewart to tell it like it is.

It’s been nearly eight years since Cheney left office with an approval rating of 13 percent, but everyone’s least favorite Nebraskan isn’t about to go away.

In a recent appearance on a conservative talk radio show, Cheney went off on the subject of Iran.

“This is a totally radical regime that is the premiere sponsor of state terrorism in the world, and Obama’s about to give them nuclear weapons,” Cheney said. “I can’t think of a more terrible burden to leave the next president than what Obama is creating here.”

That’s where Jon Stewart comes in.

Making the case as a 1940s gumshoe detective, Stewart points out a few painfully obvious facts to a stand-in for Cheney, a balloon with a frowny face.

Cheney was an architect for the Iraq War, a war that vastly strengthened Iran and removed America’s ability to monitor the country’s progress.

Better yet, Cheney was doing big business with Iran until he became a candidate in the 2000 election. In those years, Cheney argued that the American government ought to lift sanctions that made it slightly more difficult for him to make millions with what he now calls a “radical regime.”