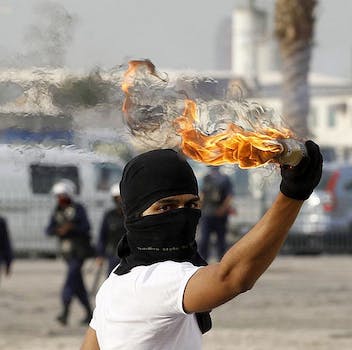 Four men, all in their 20s, were arrested Wednesday for defamation against Bahrain's royal family.

The Bahraini government has charged four men with defaming the country’s king on Twitter.

The men, all in their 20s, were charged with insulting King Hamad and other family members. They were arrested Wednesday and had their computers confiscated, Reuters reported.

“Bahrain recently changed their laws to be tougher on those who use Twitter to criticise the regime,” Bahraini political strategist Dominic Kavakeb told the International Business Times.

The four men, whose names have not been released, have been held in police custody for a week and will face trial soon.

In August, a well known Bahraini activist jailed for his tweets against the government had part of his conviction overturned. Nabeel Rajab was jailed on July 9 on three separate charges claiming he incited violence against the government, criticized Bahrain’s prime minister on Twitter, and participated “in illegal rallies and gatherings,” Rajab’s lawyer told the New York Times.

Rajab was initially given a year-long sentence for each of the three charges, and could be jailed until 2015 even though the Twitter-related charge has been thrown out.

In September, Zainab al-Khawaja was was jailed for two months for ripping up a picture of King Hamad. Since April, she has been arrested on more than two occasions for protests against the government and insulting police officers.

It is unclear what sort of punishment the four men arrested this week will face for their tweets.