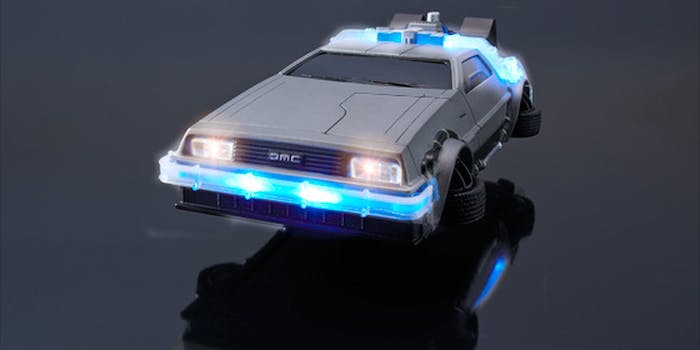 Go back to the future with the Delorean iPhone case

It may be bulky but that's the price you pay for style. Or something.

Quick, open up your wallet. How much money is in there? Is it somewhere in the range of “too much”? OK, now grab your iPhone and take a look at the case. You probably have something that’s practical, functional, and not at all superfluous and unnecessarily. Throw it away. Then get ready to meet the answers to all your problems: the Delorean.

Bandai has turned the car made iconic by the Back to the Future series into an entirely absurd iPhone 6 case that you probably want because even though it’s ridiculous and you know better, it does look pretty cool through your ‘80s tinted lenses.

As far as miniature reproductions go, the toy company managed to capture plenty of details of the DMC-12 that Doc Brown modified into a plutonium-powered time machine. The phone is housed under the body of the car, locked in alongside the wheels (which are permanently in hover mode). Every time you get a call, the LEDs on the case light up as if you’re about to generate gigawatts of electricity.

For all that flash, you will have to sacrifice a bit of function. While the case allows the camera to remain in use, it does obscure it behind a sliding hood panel. The volume buttons are also obscured, hidden behind a flip-up wheel well. And if you thought complaints about the size of the iPhone 6+ were bad, have fun trying to fit this thing into your pocket; it adds over an inch and a half of thickness to your smartphone.

Who are we kidding, though? At this point you’re probably already too giddy to even pay attention to the pitfalls. You can pre-order the case from Bandai for about $50. Just know that it isn’t an actual time machine so you cannot go back and undo this decision at any point in the future.