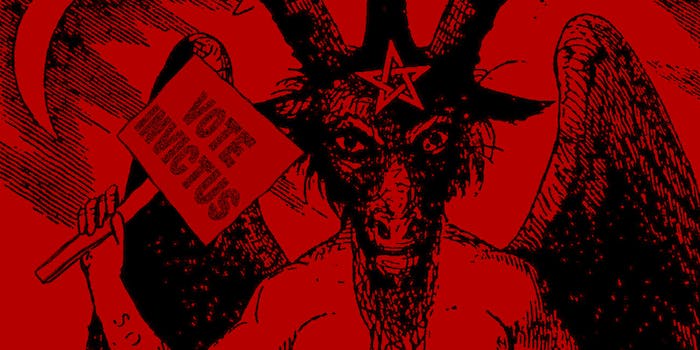 And a history of advocating for eugenics. Did we mention that part?

There’s massive discord in the Florida Libertarian Party, stemming in part from one Senate candidate’s history of drinking a goat’s blood in a pagan sacrifice.

The head of the party’s state chapter, Adrian Wyllie, has resigned in order to protest the nomination of Augustus Sol Invictus as the party’s nomination for U.S. senator.

For most candidates, admitting that they slaughtered a goat after a weeklong fast in the desert two years ago, as Invictus did to the Associated Press in a story published Monday, would be by far the most controversial thing in their history.

But Invictus isn’t, of course, a conventional candidate. Visit his website and you’ll be greeted with a video of him giving a speech in which he readily admits he’s pissed off his share of people. “I’m banned for life from my graduated business school. My law school in Chicago had me hunted by the FBI two years ago,” the self-proclaimed Southerner says in an accent that the Daily Dot will leave to the reader to attempt to identify.

In one of many “fireside chats” he’s posted to YouTube, Invictus mentions his support of eugenics, which has led to what he says are attacks from his own party, though in his website’s FAQ, he says he hasn’t supported euthanizing “physical handicaps, incurable diseases, and other such ills afflicting humankind” for several years now. His FAQ also includes a defense of adopting the fasces symbol, famously used by Italian dictator Benito Mussolini during the Second World War, because his intent is to evoke the Roman Republic, which also used it.

In one Facebook post, Invictus writes “Hell yes” and links to an article titled “When Their School Dissolved Its ROTC Program, These Students Formed Their Own Paramilitary Group.” The article is on the Onion’s Clickhole.com, meaning it’s a parody.

It remains extraordinarily hard for a third-party candidate to get elected to federal office in the U.S., but Invictus maintains he’s at least qualified. The fact that he previously renounced his U.S. citizenship didn’t actually count, he said. As he wrote on his website, “Merely stating in a letter composed on U.S. soil that one renounces one’s citizenship has no legal weight whatsoever.”