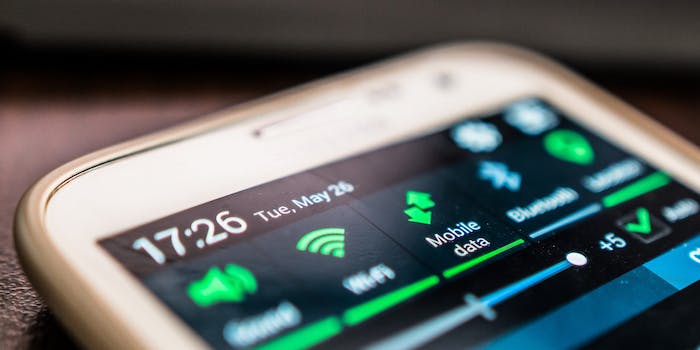 AT&T apparently has a different definition of “unlimited” than the rest of us. The company recently posted notice on its website that costumers paying for an unlimited mobile data plan will be hit by “network management practices” after bypassing 22GB of data usage.

The announcement from AT&T that its unlimited plan is not actually unlimited—commonly understood to mean “without any limits or restrictions”—is meant to come as a pleasant surprise to its customers. But this marks an increase in the amount of data that these legacy unlimited plans are allowed to use without being throttled.

A spokesperson for AT&T told the Daily Dot, “We are raising the high-speed data usage threshold for our legacy unlimited plan users to 22GB because our network is stronger than ever before. Now, Unlimited Data Plan smartphone customers will only experience reduced speeds when they exceed 22GB of data in a billing cycle, and only if in an area where the network is experiencing congestion.”

Prior to bumping the bar up, AT&T would slow down speeds for customers on their LTE network after 5GB of data usage. The problem got so bad, the Federal Trade Commission (FTC) became involved and sued the service provider. AT&T was also hit with a $100-million fine by the Federal Communication Commission (FCC), likewise for throttling data on subscribers with unlimited data plans.

AT&T has previously utilized a variety of methods to dissuade users from using the amount of data they pay for, including blocking FaceTime calls on uncapped plans.

Though the threshold is now higher, the tactics aren’t all that different. In the statement posted by AT&T, it explains “Customers on tiered data or Mobile Share plans are not subject to these network management practices.”

If you’d like more than 22GB of data from AT&T without the service provider intentionally running your data through a funnel so it gets to you slower, you can subscribe to one of the Mobile Share plans that offers capped data up to 50GB. The 25GB plan starts at $175 a month, not including a device charge.