Zoltan Istvan reports on his experiences at the DNC and RNC.

Of the thousands of protesters at the Republican and Democratic conventions, one of the most noticeable groups were the born-again Christians. But this year—perhaps for the first time at national conventions—they were met with resistance from organized atheist and transhumanist protesters clashing against them.

With approximately a dozen atheists and transhumanists, my group of supporters engaged the Christians and campaigned in front of them. Sometimes wearing Transhumanist Party t-shirts and holding posters, we argued with them, blocked press from getting good pictures of them, and generally promoted to the public the power of reason over faith.

Other protesters, often fans of Bernie Sanders, joined our cause and helped protest against them. One of my favorites was an LGBT supporter holding up a sign with a penis drawing on it and the words “I love sinning” emblazoned just below it.

At the Republican National Convention, my team and I were able to temporarily block the born-again Christian procession attempting to make their way down the busy E 4th St.—right in front of the MSNBC live filming booth. Additionally, it caught the attention of GOP delegates and press as they were making their way into the nearby convention center.

You have to give the Christian protesters credit. They know how to make a spectacle and get their message out. You can hear them shouting scripture with their megaphones from 100 yards away. And their colorful six foot tall banners on poles are provocative and attention-getting. Some of the banners read “Homo Sex Is Sin” and “Stop Being a Sinner” and “Obey Jesus.” Others banners quoted biblical scripture. Some talked of hell fire and the end of the world. 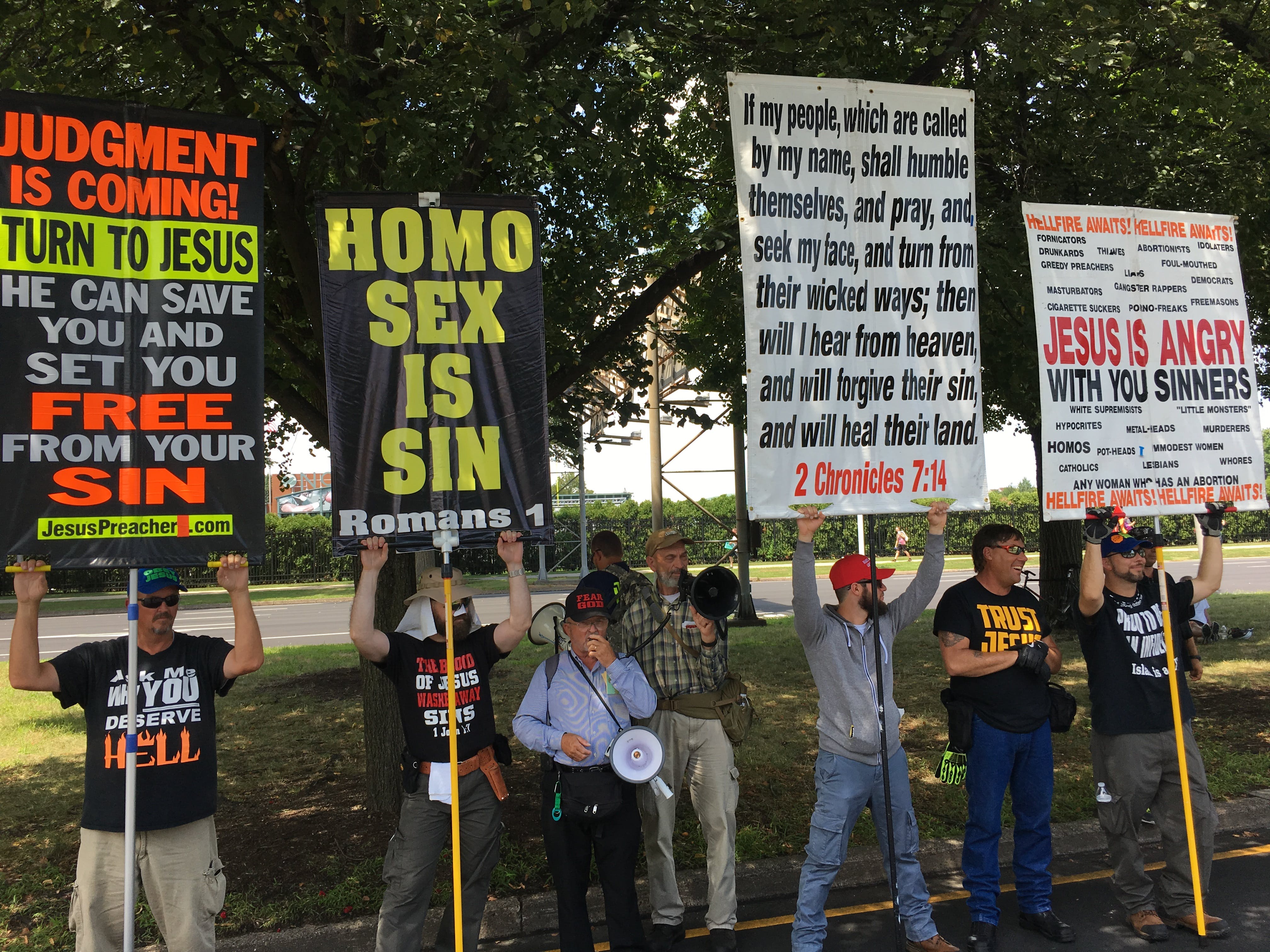 My team and I have some work to do to create better banners and be more organized, but it was a powerful start for many atheists like myself that want to counter religion’s negative influence. I believe in the right for Christians to speak their minds, but I don’t think nonreligious people should stand around quietly and just shake our heads at irrationality. Confronting religious deception is vital.

“It’s important for atheists to make a stand against religious forces if atheists want a more secular world,” says Mario Gruber, a writer and volunteer for the Richard Dawkins Foundation for Science and Reason.

We live in a nation where all 535 members of Congress, all eight Supreme Court justices, and our President are publicly religious and believe in an afterlife. For the life of me, I just can’t see how that is authentic separation of church and state.

Politicians follow their religious inclinations when making policy decisions. A prime example of this comes from former President George W. Bush, who restricted federal funding for stem cell research during a majority of his presidency due to his religious convictions. America and the entire global medical field suffered dramatically because of that decision.

Hundreds of thousands have had worse health and some surely died as a result. Stem cell innovation continues to be one of the most important new treatments for a variety of ailments. Bush’s restrictions have pushed research seven years behind where it could’ve been. 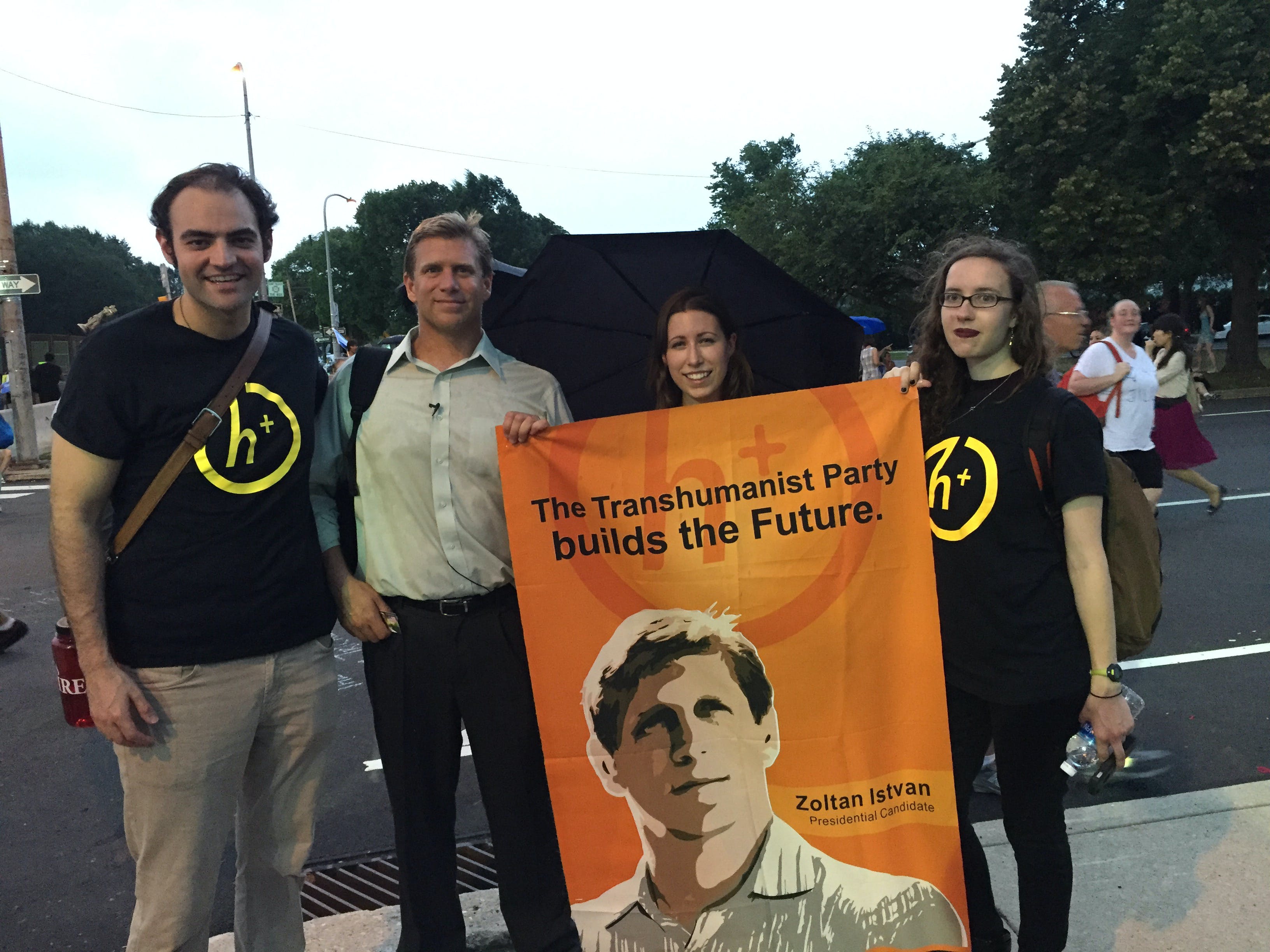 Many atheists and transhumanists question whether we should even bother protesting against fundamental Christians. Some have even asked me if it’s counter-productive to declare myself an “atheist presidential candidate” to the media. However, I worry that passivity in the atheist community will ultimately keep us living in a Christian nation indefinitely. I would like to see America quickly grow out of its religiosity. I support people that embrace open-minded spirituality that isn’t tied to any fundamental religious text or determines its rules bases on so-called historical prophets. Spirituality, as author Sam Harris puts it, is natural and helpful for a happy life:

“While spiritual experience is clearly a natural propensity of the human mind, we need not believe anything in insufficient evidence to actualize it.”

The good news is that recent reports show the nonreligious growing quickly in America, especially amongst youth. I hope we continue down that path—and I believe we will. One sure way to do that is to not let the Christians be the only ones getting attention for spreading their message. Both national conventions had many thousands of journalists attending them, and it’s important for atheists to show the media that our ideas are catching on and being actively represented to the largely religious public.

In the future, we’ll have new ideas to counter protesting Christians, too. My wife is a medical doctor and works at Planned Parenthood, and as a transhumanist, I’m working on organizing a group of six foot tall robots to protest the religious demonstrations at abortion clinics. Additionally, The Transhumanist Party, which owns drones, is also looking into ways to use flying devices to carry atheist and anti-death banners in the sky, as well as loudly playing speeches and quotes from luminaries like Christopher Hitchens.

I know secular hackers who are working on creating atheist bots that spread secularist themes perpetually online. A whole new range of technologies will help the upcoming generation of atheist and transhumanist protesters to get their message out and make America more secular.

The future for atheists, transhumanists, and those who want to counter religion is looking strong. It begins with activism and standing firm against the faith-minded who wish to control us with archaic religiosity and unreasonableness.