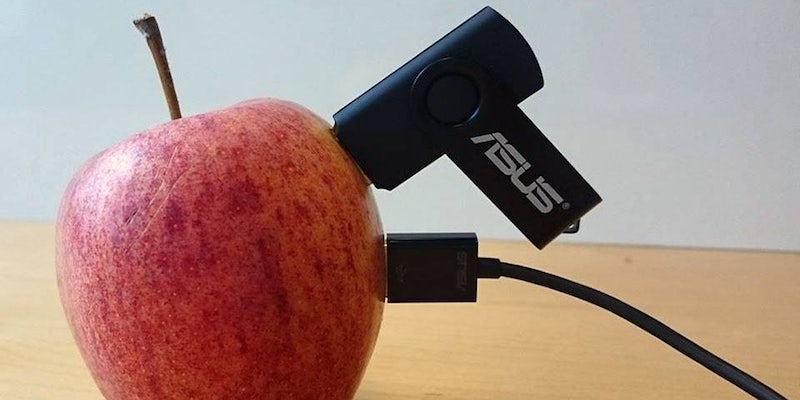 If Lame Joke of the Year were a CES award category, Asus would be a frontrunner.

Consumer electronics maker Asus has a long history of being “inspired” by Apple products. Just this week the company teased its Apple Watch clone, the newly revamped ZenWatch 2.

So perhaps it shouldn’t be too surprising that Asus Sweden made the following post on its Facebook page. If Lame Joke of the Year were a CES award category, this would be a frontrunner.

If you can’t read Swedish, allow me to offer a rough translation:

“We found an Apple with space for two USB devices!”

The joke is a not-so-subtle jab at Apple’s new single-USB MacBooks, which require an additional hub to be utilized with multiple USB accessories.

Replies to the Facebook post are predictably mixed, with some pointing how how utterly Asus has failed to gain traction in the world of mobile, and others brushing it off as a funny if somewhat tired joke at Apple’s expense.

Whatever your opinion, it’s clear that Asus is just trying to have some fun, as it has also been replying to Facebook comments with additional photos of the apple in question. After being asked by one Facebook user why Asus doesn’t stop mocking Apple and instead try to actually compete with them, the company posted this: